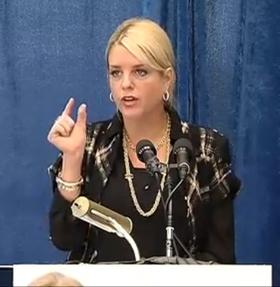 Attorney General Pam Bondi says she’s on board with a bill making it easier for sexual abuse victims under the age of 17 to privately record their attacker so it can hold up in a Florida court.

“Hopefully, we’ll be able to get that through because that’s very, very important. But, just know, that it’s a very narrow, narrow field, and only has to do with children and rape victims—not just at the hands of their parents, but any pedophile,” said Bondi, during a recent Associated Press gathering in Tallahassee.

Bondi says her interest in this stems from a recent Supreme Court ruling that gained some attention.

“Of course, we know you can’t record someone without their permission in the state of Florida,” she added. “This case, however, involved a 12-year-old girl, and she was being raped continuously by her mother’s boyfriend. Of course, she doesn’t think Mom is going to believe her. She’s 12, she’s 12! So, she taped it. She taped his confession, she taped his threats…it was used at trial and it was thrown out because it was unlawful.”

And, she says it will be one of her priorities to make it so victims, like the girl, have a voice.

“So, we want to create this session, a very narrow exception, because now kids have smartphones,” she concluded. “You know, back then, they didn’t have the ability to do that to be able to catch their accuser on their own.”

Florida Matters this week took a deeper look at human trafficking, including the role physicians in the state play in identifying those at risk, and treating those who have been victimized.

Attorney General Pam Bondi hopes to build on past anti-trafficking efforts with her new Statewide Council on Human Trafficking. She led the panel’s first meeting Monday in Tallahassee.

According to the National Human Trafficking Resource Center, Florida is ranked third in the nation for the number of calls received by the center’s human trafficking hotline.