The Turtle Hospital in Marathon releases 50 to 60 sea turtles back to the ocean every year. On Friday two unusually large turtles returned to the sea — with new souvenirs from their time on land.

Little Money, a 365-pound female green sea turtle, and Coco, a 215-pound male, both spent months at the Turtle Hospital being treated for gastrointestinal issues.

And both were fitted just before their release with satellite trackers, which will allow researchers, and the public, to follow them online.

Both will take part in this year's Tour de Turtles, an annual project that allows the public to track sea turtles for three months in a "migration marathon."

"We fix them and we let them go and we don't hear from them and we always say, 'No news is good news," Turtle Hospital Founder Richie Moretti said. "It's really nice to be able to see where they actually go." 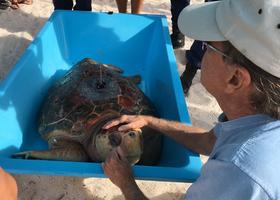 It's especially unusual to have a satellite tracker on a male sea turtle, since they spend their lives in the ocean. Trackers are more common for females, who come to shore to lay eggs.

Coco, the loggerhead, made a beeline for the sea when he was released Friday morning in front of a crowd of hundreds of people at Sombrero Beach in Marathon.

Little Money took a little longer. She stayed on the beach until she was carried and encouraged into the water, then hung around near shore, surfacing occasionally for air.

"That's probably a 70-year-old turtle, and she's going to do exactly what she wants," Moretti said.

Bette Zirkelbach, manager of the Turtle Hospital, kept an eye on Little Money to make sure she didn't return to shore where the crowd still gathered. But she said the turtle was fine — just enjoying a luxuriant seagrass bed after months in a fiberglass pool.

But she said she wasn't optimistic about the turtle's chances in the Tour de Turtles migration "race" that starts Aug. 1.

"We need to vote for her for the people's choice award," she said. "Because I don't think she's going to win the race otherwise."