There are lots of ways to measure the recent spike in opioid overdoses in Miami-Dade County. You can look at the number of deaths from fentanyl—a potent drug often mixed with heroin sold in the street—which spiked from 13 in 2014 to nearly 300 just two years later, or at the even more powerful derivative carfentanyl, developed as an anesthetic for elephants, and which, by rights, should only be available at the zoo.

You can track the use of naloxone, a drug used to revive people after an opioid overdose—fire rescue teams with the city of Miami used the drug 700 times in 2015, and more than 1,700 times the very next year.

Or, says Renita Holmes, a community activist and Overtown resident, you could just count the bodies.

“You need to turn this thing upside down,” Holmes said, after a panel on opioids convened by the U.S. Attorney’s Office at Booker T Washington High School on Thursday. “The organizations that are resident-based, that are community-based, that are providing assistance to heroin users, doing prevention, are not getting the resources.” 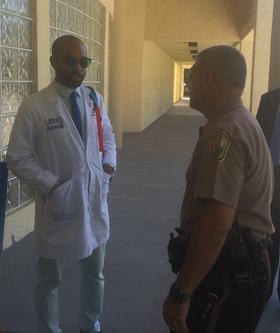 Officials from the Drug Enforcement Administration, Miami-Dade County and the Miami police were all eager to demonstrate that law enforcement is shifting to a more ‘holistic’ approach towards drug use, targeting dealers rather than users, and ramping up efforts at education and outreach in hotspots like Overtown.

Greg Rice, who runs a local treatment program, told the panel he hears from lots of homeless people who want to get off drugs. “The things I’m hearing is, ‘There is no help.’ If a person that’s homeless, addicted to drugs, what is the next step if they want to do the right thing?,” he asked. “Besides going to jail.”

The answer was not reassuring: According to Rosen, of the State Attorney’s Office, there are just 247 in-patient treatment beds that would be free to people without insurance. “So basically what they can do is try to get on the waiting list?” Rice asked.

One new resource in the neighborhood is the IDEA exchange, the first legal needle exchange program in the state of Florida, which opened last year. “To be innovative in the state of Florida, the state with the highest rate of HIV, all you need to do is implement what they’ve been implementing around the world for the last 20 years,” said Dr. Hansel Tookes, a University of Miami resident physician who founded the program. “Imagine that!”

Tookes says both law enforcement and local political leaders have been supportive of the program, but that it needs to grow. “There are probably 10,000 people who inject in Miami-Dade County and we’ve only seen 250 or so”—a figure that includes visitors from as far away as the Florida Keys.

An overdose revival drug called Naloxone, commonly referred to as its brand name Narcan, can be bought over-the-counter in 14 states, but Florida is not one of them.

With the state’s overdose count increasing, the University of Miami’s IDEA Exchange Center, Florida’s first public clean syringe program, has recently been distributing the revival drug for free at its base location, in 1636 NW 7th avenue in Miami.

After an impassioned debate over minimum-mandatory sentences, the Florida Senate voted Friday to send a bill to the governor that would impose tough penalties on people convicted of trafficking in fentanyl and related opioid drugs.