The green, foul-smelling goop has been sighted in Intracoastal canals, near Annie Beck Park, and the Las Olas Isles neighborhood.

Adam Weinstein lives on the 15th street canal, and noticed the green floating patches near the dock behind his house two weeks ago.

"I took my five-year old son to go kayacking off of Annie Beck Park... and you could see a little tiny bit in the water,” he said. "I was like, 'maybe I'm nuts because we haven't had that in Broward yet.'"

But sure enough it was, and he reported it to the state's Department of Environmental Protection.

Governor Rick Scott declared a state of emergency due to the algae in seven counties in July 2018, which included Palm Beach County, but not Broward.

"Earlier this week, I noticed it starting to get a lot thicker," Weinstein said. "It doens't stink too much here yet, but it collects at low tide and high tide points...on the top it looks like a bit of an oil slick, but it's particulate."

The algae outbreak in freshwater is caused by discharges of excess water from Lake Okeechobee. It’s known to carry harmful bacterias, and can cause respiratory and other health problems in humans.

The blooms feed on nitrogen, often found in lawn fertilizers and pet waste. They take oxygen from water, killing marine life, including fish.

Weinstein is frustrated with the state's response to the red tide, on the West Coast of the state, which is also caused by a type of algae, and he worries that not enough will be done to address the blue-green algae in his own backyard.

"I've seen fewer live iguanas, and more floating dead ones," he said. "We're life-long Floridians, this land matters to us, and we knew that a lot of this is fertilizer and agricultiral by-product. We're all going to have to do a little bit to maybe change things so that this isn't a bigger problem going forward."

The state’s Department of Health has not yet issued any health advisories for the Fort Lauderdale area, according to city spokesman Chaz Adams. 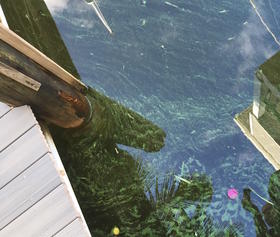 Adams acknowledged that the city has also reported the algae sightings to the state’s Department of Environmental Protection.

Dee Ann Miller, a spokesperson for the state's Department of Environmental Protection, said the department sent its Bloom Response Team to sample the algae blooms, near Las Olas Boulevard, earlier in the week.

"We will continue to respond as quickly and efficiently as possible to both observed and reported algal blooms. Persistent blooms are routinely monitored and retested,” Miller wrote in an email to WLRN.

Here are tips from the City of Fort Lauderdale if you live near, or spot, fresh blue-green algae:

Governor Rick Scott declared a state of Emergency Aug. 13 for seven southwest Florida counties currently impacted by a lingering toxic red tide algae bloom crisis. The bloom, which has persisted since last fall, now stretches some 150 miles between Naples and Anna Maria Island and appears to be moving north.

Florida this week declared a state of emergency because of a slow-moving natural disaster — red tide.

Red tide is toxic algae that have persisted off Florida's Gulf Coast for nearly a year. In recent weeks, the algae bloom has worsened, killing fish, turtles and dolphins and discouraging tourism on some of the state's most beautiful beaches.

Scott Calls For Action On Red Tide Amid Political Clamor

Political broadsides continue over who is to blame for ongoing water-quality problems across South Florida, as Gov. Rick Scott on Friday ordered more action to address red tide in coastal communities.

As Florida Struggles With Algae Blooms, NOAA Research Program Is At Risk

As Florida struggles with 'red tide' algae blooms on the west coast and blue-green algae in inland waterways, a federal program to help communities deal with harmful algae outbreaks is set to lose its Congressional authorization at the end of September.

It's been a long time since Florida's Gulf Coast has seen a red tide outbreak this severe.