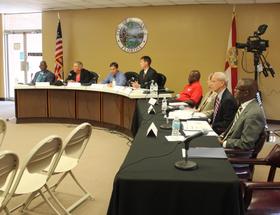 Final recommendations on a memorial for the unclaimed remains uncovered on the Dozier School for Boy grounds are now heading to the Florida Legislature. But, during the final meeting of the panel tasked with making those suggestions, tensions were pretty high.

“Identify a final resting place for the remains and creation of a memorial for the boys who lived and died at the Arthur G. Dozier School for Boys in Marianna,” outlined Secretary of State Ken Detzner.

It’s alleged that there was a history of abuse at the now-closed North Florida reform school and many boys were buried on those grounds because of it.

So far, several families have come forward to claim the remains of their ancestor, uncovered through a dig by researchers years ago. But, there are still unclaimed remains.

And, that’s why a new state law set up the task force to determine the future of the remains.

At the first meeting of the Dozier Task Force, passions ran high.

And, similar arguments were made again during the task force’s final meeting Friday.

Marianna City Manager Jim Dean is among those who wanted the memorial in a larger location—away from his community, saying it's time to move on. He adds whenever he’s in talks with anyone related to economic development or something positive coming to the area, there’s one question they always ask.

“'Isn’t that where the Dozier Reform School is located?'  This is now how our community wants to be known,” stated Dean. “Over the past several years since the excavation and the investigation process began, the public assistance rolls have escalated and job loss has risen to about 5,800. The process our community has gone through over the past several years has created a community and economic development hardship because of all the negative publicity.”

Stephen Britt is the nephew of Robert Stephens, who died at Dozier. While Britt initially wanted the memorial on the Dozier grounds, he later changed his mind.

In the end, three locations were considered: Marianna—the site of the Dozier School for Boys, Tallahassee, the state’s Capitol, and Tampa, near where many alleged survivors live and where the researchers who uncovered the remains are.

At this meeting, the public was allowed to weigh in. And, Carol Ellis says there should be two memorials. She’s the daughter of a former ward of the school, and she says her family has been negatively affected by Dozier for decades.

“Please, settle this today,” said Ellis. “Have a memorial here in Marianna. Have a memorial in Tallahassee so we can see the good, bad, and the ugly. But, let’s close this, and bring this all to a close for everybody in this room and the families.”

But, some wanted the White House building moved to Tallahassee as a place of living history, like Kevin Wood, an engineer, whose worked with former wards of the Dozier School. The White House is the place where much of the alleged physical and sexual abuse occurred.

“I have been inside that White House and when you walk into the opening, the front door—the terror that I felt—and I never even went through that building as a White House boy,” said Wood. “That is something that other people need to experience: when you walk in there, the concrete jail cells, the bars, the bench where the boys would wait to be beaten…”

But, Jerry Cooper, who sits on the task force, disagrees. A former ward of the school and the President of the so-called White House Boys, he’s was also against a memorial placed in front of the White House building. Essentially, he’d like a formal apology from the state and to see that White House building destroyed.

“To memorialize the White House, to leave it standing, it serves no purpose sir and let me say why….a lot of these kids—10 years, 11 years, and 12-years-old—were taken into that building,” said Cooper. “We know about the beatings, but when I learned—myself personally and the rest of the men—that sexual favors were passed out to keep from being beaten? That’s the last straw.”

Ultimately, the task force agreed the unclaimed remains be reburied in Tallahassee. And, there will be two memorials: one in Tallahassee and one in Jackson County. That would be for the children as well as for children and two staffers who were victims of a 1914 Dorm fire.

They also agreed that the location of the reinternment of the unclaimed remains be determined by the Florida Legislature.

And, their recommendations will now be sent to the Department of State as well as the Governor, the Cabinet, and state lawmakers.

A measure intended to help heal a community and people who suffered at a former reform school where the remains of 51 boys have been unearthed is headed to the desk of Gov. Rick Scott.

Florida may pay for burials of students whose remains were once on the grounds of the now shuttered Arthur G. Dozier School for Boys.

"There's just too many stories," Roger Kiser, who was at the school in the 1950s, told NPR in 2012. "I know of one [boy] that I personally saw die in the bathtub that had been beaten half to death. I thought he'd been mauled by the dogs because I thought he had ran. I never did find out the true story on that. There was the boy I saw who was dead who came out of the dryer. They put him in one of those large dryers."

Listen
Listening...
/
WUSF's Mark Schreiner talks about some of the findings presented in USF's final report on remains found on the grounds of the Dozier School for Boys in Marianna.

Gov. Rick Scott on Wednesday signed a bill addressing what one lawmaker described as a "dark chapter" in Florida history at a now-shuttered reform school.