A Tallahassee film producer has wrapped up his latest movie. It's the story of a young woman who is pressed into caring for a member of her family who's afflicted with Alzheimer's. 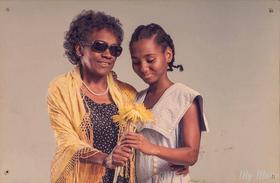 The producer's name is Kenneth Jones. Before he embarked on independent film production, he was a member of the WFSU family and worked in the station's television operation. Since then, he's developed a profound understanding of the growing struggle Americans are waging against Alzheimer's disease and other forms of dementia.

"People are living longer then we did just several decades ago," he explained. "So this is part of the large number - pushing towards epidemic proportions - of people with Alzheimer's and dementia because so many people are living into their 80s and 90s. It's why if you look at the census back in 1940 the average age of death was probably 51 or 55."

And when it comes to caring for those afflicted with Alzheimer's, Jones acknowledged that for most families, residential facilities that specialize in such care are simply not an option.

"If I wanted to stay locally at an elder care assistance facility, it would be about $60,000 a year. Okay, if I can't do that, do I have a child who can take off from work and help?"

Jones' involvement in the issue isn't just academic. He's had intense personal connection to the issue, and that experience formed the unique frame of reference that enlightens his new movie, "My Music."

"And in our film, one of the stories I thought was very unique to put into a film and screenplay was there was a time - my mother was one, my grandmother was one - where you took that child, especially a teenage girl, and send her to be the caregiver for the elderly uncle or aunt and she would cook and clean and bathe; she would do whatever."

(Music segment) That's a clip from the online trailer for "My Music." Jones said the essence of the film is the conflict between the young protagonists' sense of duty in caring for her relative and her own aspirations.

"We depict that respite as the girl goes into this old garage that her uncle had and in there she plays these records and mysteriously then she's a singer, she's always wanted to be a singer. The whole thing is she has to make a choice between what she wants and being a caregiver."

In the end, Jones said his work is a loving tribute to all those who set their personal desires aside in order to provide comfort for those who are slowly slipping away.

"At the end of the day, I think the main thing is that they are there out of their enduring love," he insisted. "I've interviewed many and researched left and right and then re-depicted it in the film, but I haven't found one yet that would not still be a caregiver if they had a chance not to go that route."

The film has already attracted considerable advance buzz and Jones expects a distribution deal to come about sometime in 2018. In the meantime, he'd like segments of his work to spark community forums on the topic of Alzheimer's, dementia and and quandary of caregiving.

"And I would love to come out and discuss that more with any groups," he offered. "Of course, we have to wait until the distributor puts the entire film out all together, but we have enough media that we can hopefully start the conversation before the (entire) film is ever out and that's one of our goals. We produced it for that reason, we're using social media a lot, but we hope we can nurture that conversation at the same time and get a film distributor."

More Than A Third of Family Caregivers Are Now Men

Florida is home to 20 million people and nearly 3 million of them are family caregivers. That means they dedicate their time, energy and money tending to a spouse, parent, children or loved ones. But the face of those providers is changing.

An Unknown Future For Military Caregivers Of Post-9/11 Veterans

The wars in Iraq and Afghanistan have drafted more than a million family members into caring for returning wounded and injured troops. They've been called "Hidden Heroes" - the military caregivers of Post-9/11 veterans.

Behind just about every senior suffering with dementia or Alzheimer’s disease is a caregiver, usually a family member, making sure they are fed and clothed and safe. But who takes care of the caregivers? To find out, WUWF’s Bob Barrett recently sat down with Margaret Jerauld, the Activities Supervisor for the Council on Aging of West Florida.

Fresh evidence that the body's immune system interacts directly with the brain could lead to a new understanding of diseases from multiple sclerosis to Alzheimer's.

A study of human and monkey brains found lymphatic vessels — a key part of the body's immune system — in a membrane that surrounds the brain and nervous system, a team reported Tuesday in the online journal eLife.

Efforts to develop a treatment that stalls the memory-robbing devastation of Alzheimer's disease have so far been unsuccessful, but scientists are making strides in another important area: the development of better tests to tell who has the condition.

Their aim is to develop more accurate, cheaper and less invasive tests to detect the biological markers of Alzheimer's-induced changes in the brain.