Since the 1970s, the hard on crime ethos has fueled the era of mass incarceration. Simultaneously, the country defunded public mental health services. A ballooning criminal justice system came in to fill that vacuum. Now the Florida Legislature is poised to reform the way mental illness is handled in that system. 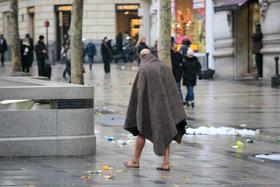 Many call America’s criminal justice system a de facto mental health care system. And Florida is no different. On any given day in the Sunshine State, there are 40,000 people with serious mental illness involved in the criminal justice system. And many of those offenses directly result from untreated mental illness. Mark Mahon, chief judge of the state’s 4th judicial district, says the system has to change.

Now some state lawmakers are offering proposals that could stem the flow of these people into the correctional system, and help them once they’re there. Representative Charles McBurney of Jacksonville and Senator Miguel Diaz de la Portilla of Miami want to divert people with mental illness away from incarceration and towards care. McBurney says his eyes were first opened to the issue during his time as an assistant state attorney.

McBurney’s bill would pave the way for mental health courts, which offer an alternative to incarceration, and emphasize the importance of treatment and therapy. McBurney says the aim of these and other diversion programs is to reduce recidivism.

“So the mental health court structure is similar to for example and patterned upon drug courts, which have been very successful. In addition, this bill expands veterans’ courts, particularly in those situations in which the criminal justice system intersects such as probation and community control,” he said.

Senator John Legg of Lutz and Representative Kathleen Peters of St. Pete want to support people with mental illness once they have entered the criminal justice system. Their reforms focus specifically on defendants who are incompetent to stand trial because of mental illness or disability. These defendants are then transferred from jails into therapy programs. This bill would keep defendants on the same medications when they make that transition. John Bryant is an assistant secretary for mental health at the Department of Children and Families.

“They arrive with mediation from the jail, yet once they arrive at out facility refuse to take that medication,” he said.

With medication and therapy, some regain the ability to stand trial, and a hearing may be scheduled. The bill would set a timeline for these hearings to take place. Here’s Bryant again.

But some may not recover, may never stand trial, and may ultimately be released. Dan Hendrickson served as an assistant public defender for 25 years, and now works for the Big Bend Mental Health Coalition. Hendrickson wants the system to do more for people re-entering society.

“The issue for people being in the hospital is not just to solve the competency but to figure out what’s going to happen when they get back home,” he said.

The House has passed both bills unanimously, and a full Senate vote is expected before the end of session.

A deal on the state's public-safety budget that lawmakers reached late Friday would not give the Department of Corrections the 734 additional positions that the agency says are necessary to make Florida's prisons more secure.

The Republican-controlled Florida House voted along party lines on Friday to retain — for now — the rates that Gov. Rick Scott and thousands of state workers are currently paying for health insurance.