Florida’s U.S. Sen. Bill Nelson is calling for someone’s head amidst the finger-pointing in Washington over the failure of the online health insurance marketplace that was supposed to launch the Affordable Care Act, also known as Obamacare.

Weeks after its startup, many people report they still can't access the HealthCare.gov website to checkout their eligibility and insurance choices. 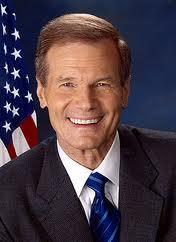 “For the computer system, it is ridiculous that it's not working and somebody ought to be fired,” Nelson declared this afternoon while talking with the news media in his Tampa office.

“But first, let's get it up and working,” Nelson added. “This is a technical issue. This is not a substantive issue. The law is the law and the law is going to work and there are going to be a lot of people that got health insurance that never had a chance to get it.”

Nelson said he does not agree with delaying the mandatory requirement for individuals to buy insurance.

His Republican counterpart in Florida, Sen. Marco Rubio, is suggesting legislation that would postpone the mandatory individual requirement because of the faulty website.

To keep you from having to search for it in the river of news, we're putting some basic information on the Affordable Care Act as it pertains to Florida in a prominent place at our home page, HealthNewsFlorida.org.

All of our Affordable Care Act coverage can also be found here, with the latest posts at the top.

(UPDATE) Florida Blue, the newly adopted brand for the former Blue Cross and Blue Shield of Florida, is canceling 80 percent of its current individual policies because they don't jibe with the requirements under the Affordable Care Act that go into effect Jan. 1. The number affected is estimated to be 300,000.

Florida's online health insurance Marketplace has been open for business since Oct. 1. But more than a week later, people are still having trouble with HealthCare.gov, the website consumers use to shop for health plans.

Maggie Banta of St. Petersburg is one of millions of visitors to the site since it opened for business a little more than a week ago. She’s been trying to log on for days, but like many others, she can’t.

A larger-than-expected surge in interest as well as complex technology are being blamed for a “sluggish” start of the online Health Insurance Marketplace serving Florida and 35 other states on Tuesday.