Parents Could Get More Control Over Classes for Disabled Students 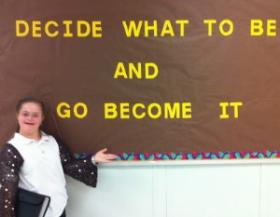 Listen
Listening...
/
Listen to the story by Gina Jordan.

Right now, schools determine whether to move a student into special education classes.

But a proposed bill in Tallahassee would give parents of children with special needs more power over their education.

Fort Lauderdale sixth-grader Mariah Harris has Down syndrome, and she wants to be a veterinary technician.

“My dream is to go to college with my friends one day,” she told a panel of lawmakers.

Mariah was accepted into a middle school magnet program that caters to her love of science and math. But before the school year started, her mother says the Broward County school district drastically changed the plan for Mariah’s education.

Linley-Harris said Mariah is getting simple worksheets that are far below her ability.

She told a Florida Senate Committee that Mariah was taken off a regular education track when she started at the magnet school.

“Because she was going into middle school, it seems as if there was a strategic plan to remove her from being able to get a real high school diploma,” Linley-Harris said.

Education for kids with special needs is spelled out in a plan tailored for each student known as an Individual Education Plan, or IEP.

“The IEP team, with the blessings from the district, purposefully dumbed down all of my daughter’s quality educational IEP goals,” Linley-Harris said.

Linley-Harris said her daughter can handle a general education program. A proposed law moving quickly through the Legislature would give parents of special needs kids the final say about their child’s education.

If a school district wants to override a parent’s decision, it would have to convince a judge.

Denise Rusnak oversees special education for Broward County Public Schools. She said schools must have the ability to do what’s best for each student.

“There’s medical malpractice,” Rusnak said. “To me, it’s educational malpractice to make a decision that’s not in the best interest of the child.”

Supporters of the change say schools are more apt to take special needs kids out of general education so they won’t have to take standardized tests like the FCAT. Starting next year, those test scores factor in to teacher salaries.

But Rusnak said the state only allows a small percentage of kids to be exempt from the FCAT.

“So, if a school is doing that, we’re going to see and were going to go in and investigate it,” Rusnak said, “and we’re going to make sure they’re making the right decisions for kids.”

In the event of a dispute between parents and the district, the federal Individuals With Disabilities Education Act requires a due process hearing.

But supporters of the bill want to give Florida parents more control than federal law offers.

“I think they’re kind of forgetting what the special part in special education was,” Siegel said, “and that is to provide that specially designed instruction to meet the unique needs of the students so the students can achieve to the same extent as their non-disabled peers.”

Siegel’s group has represented many students who she says were inappropriately moved to a special diploma track.

“They can’t recoup those credits that they’re missing,” Siegel said, “and the special diploma is going to not allow them some options such as colleges and universities and some vocational schools and military.”

Besides giving parents more power, the proposed law calls for more special needs training for teachers. It also allows parents to hire private help to assist their children in the classroom.

The proposal is getting strong bipartisan support and is ready for a full vote by the House and the Senate.