Miami-Dade Superintendent: Get Your Shots (Even Flu) 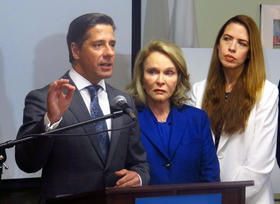 Miami-Dade County school leaders say they are concerned about a measles outbreak spreading across the country, and they urge parents to vaccinate their children.

Superintendent Alberto Carvalho says vaccinations work, and the district is tracking whether students get their required shots. Carvalho says 98 percent of Miami-Dade students have been vaccinated or are getting the shots now.

“We’ve seen recently what the outbreak of measles in Arizona can do to a community," Carvalho says. "That cannot be the case in Miami. So we are diligent in ensuring our children are properly immunized prior to beginning their school year.”

That includes 1,200 students new to the district this year, many escaping dangerous communities in Central America.

State law requires students receive five vaccinations by the time they begin kindergarten unless they have a medical or religious exemption.

Carvalho says students should also get the flu vaccine, often available for free.

"There's nothing more destructive to a child's ability to learn than to be absent from school," Carvalho says. "Better to be preventive to this measure, than to be reactive."

Veterans in Florida can now get a flu shot at any of more than 800 Walgreens locations and the drug store will electronically forward their immunization record to the VA.

It's a pilot program being tried out in the Veterans Integrated Service Network 8 (VISN8) which includes all of Florida, southern Georgia, Puerto Rico and the U.S. Virgin Islands. It requires no paper record, no remembering at your next VA health care appointment.

Most kids are heading back to school in Florida next week.  But before they can sit down in a classroom, many will have to sit down in the doctor's office for required vaccinations or a physical.

Listen
Listening...
/
4:16
Free back-to-school health fairs help parents who don't have an easy or affordable way to make sure their children get the health care they need. Health News Florida's Lottie Watts followed a family at a recent health fair at St. Petersburg College.
That presents a dilemma for kids from families who are uninsured or underinsured. Lindsey Hernandez and her children have insurance through Medicaid. But that doesn't mean it's easy or convenient to get health care. At a back-to-school health fair last weekend at St. Petersburg College, four of her children got free physicals.

Four cases of measles have been identified in Florida in the past two weeks, all of which involve travelers.

Two of the cases diagnosed involved international travelers, and the infected people had unknown or no measles vaccine, State Surgeon General Dr. John Armstrong said in a statement.

The Florida Department of Health reports that so far, no state residents have so far been diagnosed with measles, a disease that is experiencing the second-biggest outbreak in the nation in at least 15 years.