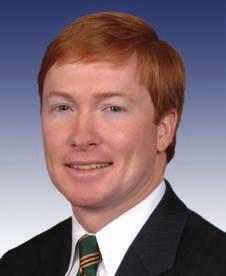 State Agriculture Commissioner Adam Putnam says the state should complete existing projects before spending money to for water storage in Central Florida. A 60,000  acre parcel of land is the centerpiece of Senate President Joe Negron’s bid to stop polluted water from fouling rivers in his district.

Negron’s plan to buy land South of Lake Okeechobee is already running into roadblocks and State Agriculture Commissioner Adam Putnam has added another.

“There are better ways to spend $2.5 billion  for water quality and everglades restoration," he told lawmakers Tuesday during AP Day at the Capitol.

Putnam added his voice to the list of opposed Tuesday. He says current water projects for the area still aren’t complete.

“You put all these engineers in a room, you put the federal and state partners in a room ,and they come up with these big plans and they only seem to last until the next election when someone else wants to airdrop in a new boxcar load of cash for the next shiny solution.”

House Speaker Richard Corcoran says he’s against borrowing money to fund the project, and Governor Rick Scott left out the purchase in his budget proposal for the upcoming fiscal year. Negron is all in for the project and says it’s his job to convince lawmakers on the merits.

"It’s an example of where singles and doubles makes a big difference for a community. A community where adding a handful of jobs that wouldn’t rise to the top of the radar for our traditional job agencies, is a big deal for that community.”

Putnam says he believes there should be a focus on career readiness and he wants to remove what he calls the stigma against trades like truck driving—a job that’s in high demand in the state.

Corcoran Says 'No' To Bonding For Lake Okeechobee Land Buy

House Speaker Richard Corcoran says he does not support a plan to finance the construction of a water reservoir South of Lake Okeechobee. Corcoran’s comments came the same day the proposal was officially filed.

A measure to bond $100 million a year in voter-approved dollars for the purchase of 60,000 acres of farmland south of Lake Okeechobee — land that owners have expressed an unwillingness to sell — was introduced Thursday in the Senate.

The Everglades Foundation on Wednesday intends to start a 12-day bus tour across Central and South Florida to push state and federal lawmakers to fund water-storage plans south of Lake Okeechobee.

$2.4 Billion Water Proposal Does A Belly Flop In The Panhandle

A $2.4 billion proposal to deal with polluted runoff from Lake Okeechobee is getting a chilly reception with some conservative Panhandle lawmakers.