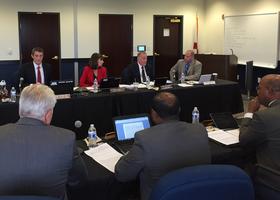 Florida is still grappling with the pill mill crisis of four years ago.  But with the problem of too many prescriptions receding in the rear-view mirror, the problem now is too few.

The Florida Board of Pharmacy is reworking its rules for prescribing controlled substances. The concern among members is that Florida’s efforts combating pill mills has left some pharmacists hesitant to fill valid prescriptions.

“There were a number of enforcement actions taken against several pharmacies and it was well known,” Michael Jackson of the Florida Pharmacy Association says.  “Many pharmacies began to have fear over just fulfilling their standard duties, and taking care of patients with pain, and created the situation where now, these pain patients are having difficulty finding pharmacies to dispense to them. “

Under the current rule pharmacists are directed to question the legitimacy of a prescription in a number of different circumstances—things like patients regularly losing medications or filling similar prescriptions from multiple doctors.

But Dr. Jesse Lipnick says the focus needs to shift toward reasons to fill a prescription rather than reasons not to.

“It’s really, you know, the cup is half full,” Lipnick says.  “The cup is not half empty.”

“I think it’s going to take an understanding that valid prescriptions should be filled,” Lipnick goes on.  “Right now my impression is that pharmacists are responding to many pressures other than the validity of a prescription.”

The board is still fairly early in the rulemaking process.  Any proposed changes still have a number of steps to follow, including time for public comment, before adoption.

After becoming the epicenter for prescription opioid abuse, the state passed tougher laws for pain management clinics. The state also implemented a Prescription Drug Monitoring Program which gave healthcare professionals a better look at patients’ prescription drug histories.The laws went into full affect in 2011. Researchers at Johns Hopkins looked at hundreds of millions of prescriptions from the year before and after.

A South Florida man who owned pain management clinics in Fort Lauderdale and Tucker, Georgia was sentenced to 14 years in prison for his role in a $15 million pill mill operation, the South Florida Sun Sentinel reports.

CVS Health has agreed to pay a $22 million settlement for the unlawful distribution of prescription drugs. The U.S. Attorney’s Office reached the settlement after a federal crackdown at two Sanford pharmacies.

The investigation was part of a larger crackdown three years ago on Florida’s pill mills. U.S Drug Enforcement Administration agents talked with pharmacy employees and found that among other things, customers would come in asking for oxycodone using slang street terms.