Hundreds of protesters representing 23 advocacy groups rallied on Saturday against the Trump administration’s family separation policies at a Homestead detention center for children who crossed the Southern U.S. border.

Chants of “Hey, Trump, leave the kids alone!” remained steady throughout the protest, even when it began to rain heavily. Many of those leading chants were children themselves.

Organizers of the so-called “March to Keep Families Together” said federal officials provided unsatisfactory options for putting parents in contact with their children after being separated. Protesters voiced outrage that asylum-seeking families were punished and separated. They were also frustrated that children divided from their parents in Texas were then transported over a thousand miles away to the Homestead facility.

The rally came hours after Sen. Bill Nelson joined U.S. Congress members Debbie Wasserman Schultz, Fredericka Wilson and Ted Deutch on a tour of the facility. The barrack-style center holds more than 1,100 children, 70 of whom have been separated from their parents after crossing the Mexico border illegally.

The lawmakers said they interacted with the children, asking them about their home countries and whether they know where their parents are. The facility was “clean” and taking good care of the minors, they said.

Still, Wasserman Schultz and Deutch complained that the center lacks the staff and resources necessary to expedite the process of reunifying the children with their families. The facility has just one person overseeing the reunification process, and she does not work on weekends.

During the protest on Saturday, organizers said that officials’ methods for putting parents in contact with their children are highly inadequate. Thomas Kennedy, the Deputy Political Director for the Florida Immigrant Coalition, said parents are having difficulty calling their kids.

“Parents are being given a 1-800 number to call, to get in touch with their children at these facilities. But they can’t track their kids,” Kennedy said. “A lot of these parents who are being deported back to their home countries don’t have access to a telephone.”

President Donald Trump’s executive order on Wednesday ending the family divisions did not address the more than 2,300 children already separated from their parents at the Mexico border. Deutch noted that the Department of Homeland Security is working to reunite the families. However, there is no clear process for how to do so.

“If it is the goal to reunify these families,” Deutch said, “then the instructions should come down from the White House to dedicate whatever resources are necessary to ensure that there are officials at every facility where these kids are being housed [and] to work round-the-clock.”

Deutch added that it should be easy for the Department of Homeland Security to reunify the children with their parents. Each one of the detained minors has been assigned a number which corresponds to a folder with information about their family members.

When the march came to a halt in front of the facility, protesters shouted chants of “shame on you” to security officers standing outside.

Samantha Hoare, who works at an education non-profit, said it doesn’t matter that members of Congress said the facility appeared to be clean. She would have expected the facility to be clean, regardless, she said.

She is more concerned with the idea behind the child separation policy, which she said goes against a wide range of political values.

“Symbolically, it is against everything that South Florida is about. We're about the American dream, we’re about people coming to the U.S. because they're thinking of something bigger. They want a home and a life and a future,” Hoare said. “This particular facility really is against that and doesn’t represent who we are as South Floridians.”

Miami-Dade County commissioners Daniella Levine Cava and Barbara Jordan and several state legislators including Rep. Kionne McGhee were denied entry to the center because they did not have a confirmed appointment. McGhee, Nelson and Wasserman Schultz turned away from the center for the same reason on Wednesday.

The commissioners called on the federal government to be more forthcoming with county officials about the children who are sheltered at the complex.

“This is not acceptable,” Levine Cava. “We need to be involved in what is happening in this community.” The commissioners and federal lawmakers noted they also want to tour the His House Children’s Home in Miami Gardens and Catholic Charities' Msgr. Bryan Walsh Children’s Village, which are also holding migrant children as young as newborns. 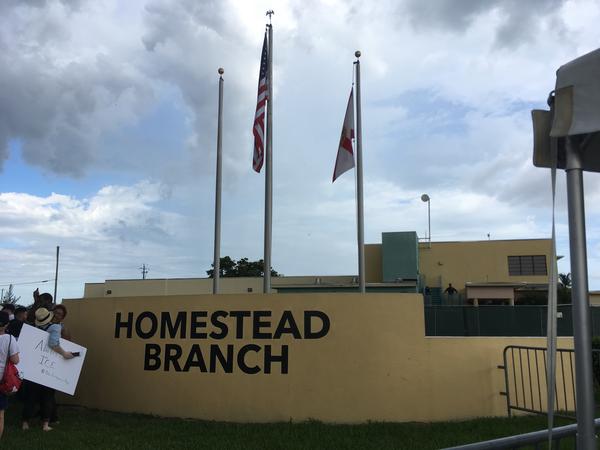 Rachel Osborn knows kids who slept in the immigrant detention centers in Texas that have dominated recent headlines.

"We have kids who will say that was the worst part of their journey," Osborn says. "They were traveling for weeks and the hardest part was being in this freezing cold room where, you know, they were fed a cold sandwich and had a thin blanket to shiver under."

And they had no parent or caregiver to comfort them and make them feel safe.

Trump administration officials have been sending babies and other young children forcibly separated from their parents at the U.S.-Mexico border to at least three "tender age" shelters in South Texas, The Associated Press has learned.