Researchers are looking into a new way to fight cancer. Their source weighs thousands of pounds, has four legs and a trunk.

They’re elephants, and they rarely get cancer.

The Ringling Brothers and Barnum and Bailey Circus’ elephant retirement facility in Central Florida teamed up with the researchers to figure out why. They hope they can use their research to help people.

Mysore, an Asian elephant, uses her trunk to stuff a second piece of bread into her mouth. She stands in a sandy enclosure at the Ringling Brothers Center for Elephant Conservation in Polk City.

Mysore is more than 70 years old and weighs about 7,000 pounds. Long reddish brown hairs cover her wrinkled head and torso.

She spent 55 years in showbiz before retiring here. Now she spends her time lounging and figuring out how she can get more bread out of visitors.

But, Mysore’s become part of a new act in her retirement. She’s a cancer study subject.

Researchers use blood from Asian elephants like her to solve a puzzle involving elephants, cancer and people.

That puzzle goes like this: Cancer is a leading cause of death among humans. But researchers found only about 4 percent of elephants die from it. 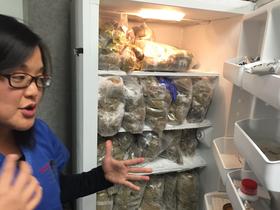 Wendy Kiso is the center’s director of conservation research. She said those numbers do not make sense when you consider the size of an elephant versus a person.

But instead, she said, elephants rarely die of cancer.

Kiso thinks the answer is a gene both humans and elephants have called p53. It’s a tumor-fighting gene. Humans normally have only two copies, but elephants have roughly 40.

“If one or two go bad they have that many back-up,” she said. “So, they have evolved in such a way to have this to prevent cancer.”

The project includes the elephant conservation center, and scientists in Salt Lake City and Israel.

Ringling got involved around 2013 with Dr. Joshua Schiffman, a pediatric oncologist in Salt Lake. He was already looking into this elephant cancer question.

Schiffman first heard that elephants don’t get cancer at a 2012 workshop in Maine.

“It was like a light switch went off and I began to wonder if we could focus more on who doesn’t get cancer like these elephants, can we maybe understand how to learn from that and translate that one day to our patients,” he said.

Watch a video about how elephants got involved with cancer below:

Schiffman was getting some African elephant blood from a local zoo. Ringling researchers eventually saw a presentation on his work that year and gave him a call.

“They explained that Ringling Brothers has the largest herd of Asian elephants in the Western Hemisphere and they were actually going to be in Salt Lake with their circus. They wanted to know if we wanted to collaborate because they too draw blood on a routine basis from their elephants to make sure that they're healthy and we were able to coordinate that blood draw,” he said.

Schiffman’s research, now with a steady supply of Asian elephant blood from Ringling, involves exposing cells to radiation so they develop into tumors. In humans, p53 will first try to repair the cells. Elephant p53, however, will mostly just kill the cells.

“It was as if the elephants had said it was so important that we don’t develop cancer why take the risk of not fixing it all the way, the DNA damage, let’s just kill the cells and start over and we said to ourselves my gosh nature has done it again,” he said.

The collaborators published their findings last fall in the Journal of the American Medical Association. 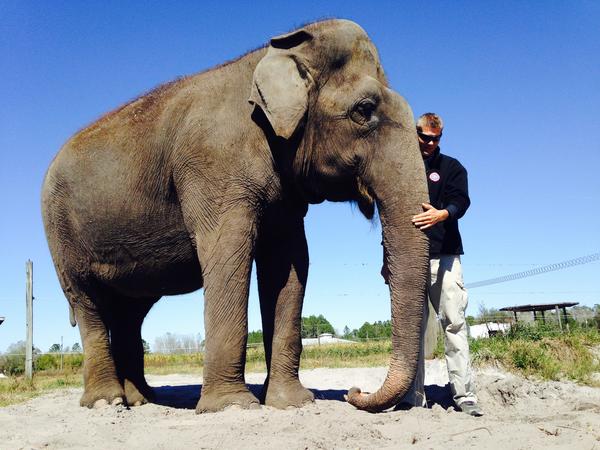 Schiffman said there’s still a lot of testing to be done. He said they’re also working with a researcher in Israel to figure out a way to deliver a potential drug to people.

“We’re trying to figure out how do we actually get this elephant p53 to the people who need it most so that people hopefully one day don’t have to get cancer anymore just like the elephants almost never get cancer," he said.

Schiffman said he hopes to begin testing a new drug in humans in the next three to five years.

He said they will continue receiving blood from the elephants at the Ringling conservation center.  All of the former circus elephants which retired this month now live there.

This year, the National Institutes of Health received $2 billion more for medical research than in previous years, bringing its national funding to $32 billion.

But that's not enough, researchers say.

When Gov. Rick Scott announced plans to spend tax dollars to boost Florida’s cancer centers, those associated with the Mayo Clinic - Jacksonville welcomed the news, since it treats thousands of cancer patients and is part of the National Cancer Institute system through its headquarters in Minnesota.  But as the Herald/Times Tallahassee Bureau reports, the pleasant feeling was short-lived.

A Diet High In Fiber May Help Protect Against Breast Cancer

If the advice to eat more fiber seems easy to ignore, you're not alone. Most Americans don't get the 25 to 38 grams a day that's recommended, depending on age and gender.

But if you're skimping on fiber, the health stakes are high, especially if you're a teenage girl.

A study published Monday in the journal Pediatrics concludes that eating lots of fiber-rich foods during high school years may significantly reduce a woman's risk of developing breast cancer.

Training The Immune System To Fight Cancer Has 19th-Century Roots

A novel immunotherapy drug is credited for successfully treating former President Jimmy Carter's advanced melanoma. Instead of killing cancer cells, these drugs boost the patient's immune system, which does the job instead.

Immunotherapy is cutting-edge cancer treatment, but the idea dates back more than 100 years, to a young surgeon who was willing to think outside the box.

Can A Cancer Drug Reverse Parkinson's Disease And Dementia?

A drug that's already approved for treating leukemia appears to dramatically reduce symptoms in people who have Parkinson's disease with dementia, or a related condition called Lewy body dementia.

A pilot study of 12 patients given small doses of nilotinib found that movement and mental function improved in all of the 11 people who completed the six-month trial, researchers reported Saturday at the Society for Neuroscience meeting in Chicago.