Parkinson’s disease will be diagnosed in another 60,000 Americans this year. Each one will learn that medication is critical in slowing down the incurable disorder. But the treatment won’t end there. A growing number of patients in the Tampa Bay area are finding the body and mind can benefit from another prescription - one of exercise and physical therapy.

Listen
Listening...
/
Click here to listen to the story

“Keep it strong and big….Big step out. Stretch the arms….three more…one and back, two and back and last one…and three, finish. Good." 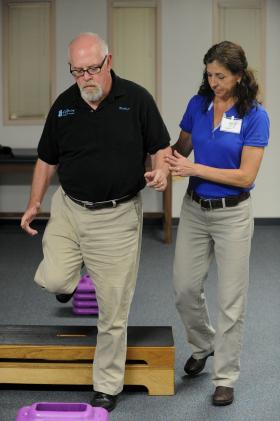 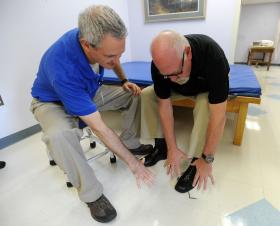 Bruce Wright’s going through the motions again, and again, and again. Diagnosed with Parkinson’s eight years ago, the hospital chaplain’s been steadily deprived of dopamine – the chemical messenger between his brain and body. He’s lost the ability to move and speak with ease.

“Everything is being tighter. Muscles are cramping. Movement is constrictive," he says. "Everything is done a far more restrictive plane. Prior to the therapy I just went along with it and did the best I could.”

The exercise-based therapy Wright learned at Florida Hospital Tampa looks like a mix of marching band drills and tai chi balancing moves. Patients and therapists face off, mirroring each other’s swooping arm circles, high stepping marches and vocal warm ups. The moves are so theatrical it turns the heads of hospital patients undergoing their own therapy.

“After being exposed to this program, I am consciously, constantly exaggerating my movements when I walk," he says, "making longer steps, trying to lift my knees up higher.”

Margie Moore, Wright’s physical therapist,  says this therapy - called "loud and big" - is only being done locally at Florida Hospital.

She says the intense month-long program – and continuous workouts at home – retrain the dopamine-deprived brain. Any exercise like this, she says, can help a Parkinson's patient.

“It looks a little bit strange to others looking. So we actually do the walking with them so they aren’t alone," she says. "We try to explain this is really important to try and retrain the brain, but sometimes they do feel a little but strange doing the motions.”

The same goes for a Parkinson’s patient’s speech. Vocal therapist Cara Bryan says symptoms such as stuttering and weakened modulation can be improved with a little coaching. She challenges Wright to see how long he can hold his strong baritone – bolstered by years of preaching and singing hymns.

“Ahhhhhh……..That was great. Almost 14 seconds. Great job. How did that feel for you? Good. I ran out of breath. Were you using more effort? Absolutely.”Bryan says these exercises helps patients measure their own loudness. That’s something they can no longer do instinctively.

“Unfortunately Parkinson’s skews a person’s perception of appropriate loudness," he says. "They may feel they are loud enough or may sense they are. Truthfully, listeners aren’t hearing them well.”

So far, Wright’s voice hasn’t been as big a concern as his spirit. About half of all Parkinson’s patients suffer from depression, or in Wright’s case, a diagnosis of profound apathy.

Parkinson’s is a disease that makes you want to sit in a corner, and play it safe, Wright says. He hopes others see how exercise can be a boost to the body, mind and spirit.

“Consciously doing the exercises, consciously and purposely doing those kinds of movements," he says, "um – kind of forces you out of your recliner so to speak."

Mary Shedden is a reporter with the Tampa Tribune. You can read the print version of her story HERE.