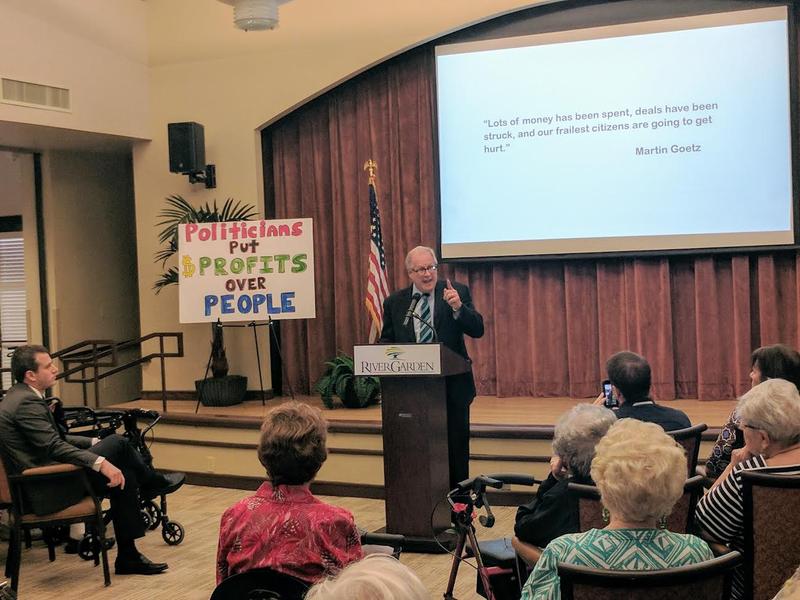 With two weeks left in the legislative session, some Jacksonville elder care providers are rallying supporters against a Senate-proposed change to how nursing homes are funded.

Most nursing home residents are on Medicaid and Medicare, and currently homes like River Garden bill the state for the care they’ve provided. Under the new proposal, each home would receive a flat amount before care is rendered.

That means some high-performing facilities like River Garden will lose out on tens of millions of dollars between them, and other homes stand to rake in extra cash that’s not tied to state ratings.

River Garden CEO Marty Goetz said the proposal also lacks a mandate for how that money is spent.

“All of that money that I’m giving up, and that St. Catherine’s is giving up, and Bon Secours is giving up and are going to those folks in your handouts … don't have to spend the first dime of that on care,” Goetz said. “Is that acceptable to you as a taxpayer?”

Evelyn Peck volunteers at River Garden and her husband lived here for the last four years of his life. She said reducing staff could’ve made her husband’s final years worse.

“All human beings should care because hopefully everybody will grow old and you don't know what life is going to hand you and you’re going to need a place maybe and you want that place to be the best,” she said.

Despite these concerns, the Florida Health Care Association, the lobbying group representing 80 percent of the state’s nursing homes, supports the measure as more fair because it gives homes more flexibility to spend state money as they choose and provides small incentives for the highest-rated homes.

Goetz said he favors a bill sponsored by Sen. Aaron Bean, R-Fernandina Beach, which allows for adjustments to the funding formula every three years.

That bill has no House counterpart and hasn’t been heard in a single committee.

Reporter Ryan Benk can be reached at rbenk@wjct.org, 904-358-6319 or on Twitter @RyanMichaelBenk.

Two nursing-home industry groups sparred publicly Wednesday about a Senate plan that would revamp payments in the Medicaid program.

Hospitals have long been reluctant to share with patients their assessments of which nursing homes are best because of a Medicare requirement that patients' choices can't be restricted.

For years, many hospitals simply have given patients a list of all the skilled nursing facilities near where they live and told them which ones have room for a new patient. Patients have rarely been told which homes have poor quality ratings from Medicare or a history of public health violations, according to researchers and patient advocates.

Nursing homes are gearing up to fight a plan that could result in what they say are widely varied Medicaid reimbursement rates. Its part of a legislative push for efficiency, but the move is worrying providers in the $4.8 billion program.

The American Health Care Association, an industry group that represents most nursing homes in the U.S., has filed a lawsuit against the federal government over a new rule that protects the right of patients and their families to sue nursing homes in court.