TweetShareGoogle+Email
Listen
Listening...
/
Press Listen to hear the radio version of this report

Mario Stevenson is a respected virus expert. He heads the infectious diseases division at the University of Miami’s Miller School of Medicine. He’s done pioneering research on HIV.

“Four months ago,” Stevenson told me, “I thought Zika was an Italian football player.”

He’s since learned Zika is a mosquito-borne virus – one that’s marauding so badly throughout Latin America and the Caribbean that the World Health Organization this week declared it a global health emergency.

Along the way, UM has assumed a major role in helping to stem it, starting in Stevenson’s lab at the school’s Life Science Building in Overtown. Among its efforts, WLRN got a first look at a new test Stevenson and his team have created that will diagnose Zika more quickly and reliably.

For Stevenson, the urgency can feel personal as well as clinical.

If he and other scientists were unfamiliar with Zika before, it’s because its symptoms are usually mild compared to similar but more serious tropical sicknesses like dengue. But one thing has made this Zika outbreak especially scary: It may be linked to microcephaly, a birth defect that results in abnormally small brains and heads. That tragic condition is suddenly being found in thousands of babies born to pregnant women infected with Zika.

Most are in Brazil – and Stevenson’s wife is from Northeast Brazil, where the epidemic has hit hardest.

“My wife’s cousin is expecting twins,” he says, “and she is terrified.”

She hasn’t been infected, but Stevenson is all too familiar with the anxiety.

“People are living in fear,” he says. “It’s very difficult for them to protect themselves in areas where mosquitoes are just everywhere. These are very wet tropical climates. There’s stagnant water everywhere.”

Stevenson, a Scotland native, met his wife while doing work on the HIV virus in Brazil. UM and Brazilian scientists have combated HIV together for years, and that collaborative relationship makes it less surprising that UM has moved forward on a better Zika detection test – which Brazilian doctors sorely need. It should arrive in the coming days.

“The test used [currently] to detect the virus unfortunately cannot distinguish dengue from Zika,” Stevenson says as he and an associate examine a royal blue dye containing the molecular process.

“This test does that. It amplifies the genetic information of the Zika.”

While Stevenson is working to expose the Zika virus, another UM researcher is laboring to expunge it.

Down the hall is pathology professor David Watkins. He too works closely with Brazil on viruses like HIV and dengue. And now: a Zika vaccine.

“This is the first time that Brazil has seen this virus,” says Watkins. “So nobody has any pre-existing immunity to it. And that probably is the reason that it is enjoying such explosive growth.” 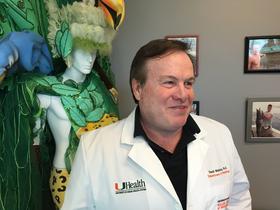 But this isn’t the first time Watkins has seen Zika. In fact, you could say he and Zika grew up on the same street. Watkins is the son of a Welsh tropical agronomist – and he was born in Uganda near the forest where the Zika virus was discovered some 70 years ago.

Watkins has a number of battle plans on the board.

“For example, we could take the envelope, the outer surface of Zika, and put it into the yellow fever vaccine,” he says.

Right now, Watkins is on at least half a dozen daily phone conferences with counterparts at Brazilian biomedical institutes like the Butantan in São Paulo. It helps that he speaks Portuguese – which also reflects his own fondness for Brazil.

“I would say,” Watkins admits, “that Brazil is my favorite country in the world” – and you need only look inside his office, which is filled with stunning samba costumes from past Rio de Janeiro Carnaval parades.

One of the Brazilians Watkins is brainstorming with is Dr. Esper Kallas, a vaccine expert at the University of São Paulo. Kallas says UM is helping Brazil “increase our capacity to confront this crisis.” But he notes the Brazilians are giving researchers like Watkins a better fix on how factors like global warming could lead to Zika infection in the U.S.

“The increase in temperature may set the stage for Aedes aegypti [the Zika-carrying mosquito] to spread northbound,” says Kallas. “I wouldn’t be much surprised if you find a local transmission of this virus within the year.”

“The Brazilian community here could help distribute reliable information to areas most affected,” says Joffe, “specifically to pregnant women and women who would like to get pregnant.”

Joffe also points to one of Brazil’s best known assets:

“Brazilian people are very resilient and they have a very positive way to face crisis.”

That’s something we may see this weekend – when Brazil’s annual Carnaval celebration starts amid the Zika sorrow.

What We Know So Far About Sexual Transmission Of Zika Virus

A patient acquired Zika virus in the U.S. through sex with a person who had traveled to a place where the virus is circulating, Dallas County, Texas, health officials and the Centers for Disease Control and Prevention reported Tuesday.

Six new cases of travel-related Zika were confirmed this week in Florida.

That’s according to the Florida Department of Health, which reported the cases to the U.S. Centers for Disease Control.  That brings the number of Florida cases to nine total, none of them in pregnant women. All are believed to be contracted by someone traveling outside of Florida.

The rapid spread of the Zika virus has raised interest in a British company that has developed a genetically modified mosquito. Oxitec has produced a genetically engineered line of the Aedes aegypti mosquito, the mosquito that carries dengue fever and chikungunya. Those tropical diseases have become common in Latin America and are now showing up in Florida.

Aedes aegypti also carries Zika, a disease whose symptoms include fever, like dengue. It has also been linked to a birth defect, microcephaly in children born to women infected with Zika.

The outbreak of Zika virus in Brazil and other countries has raised concern that the pathogen could start spreading widely in the United States, as well. But federal health officials and other infectious disease specialists say so far that seems unlikely.

"We are alone. We have been abandoned by the state," says Marilia Lima, cradling her 2 1/2-month-old son, Arthur, against her chest.

Arthur is one of some 3,500 babies born with microcephaly, a birth defect that has been linked to Zika virus, since the virus was identified in Brazil in May. Although a definitive cause-and-effect relationship has not been proven, both Brazilian and international doctors believe there is indeed a connection.