Miami-Dade Moms Among The Highest In C-Section Rates

TweetShareGoogle+Email
Listen
Listening...
/
Last year almost half of all babies born in Miami-Dade County were delivered by C-section. 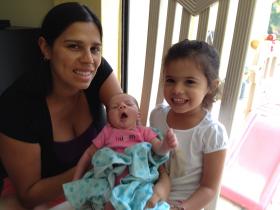 Although the World Health Organization recommends Cesarean rates stay between 10 and 15 percent, last year almost half of all babies born in Miami-Dade County were delivered by C-section.

According to the Florida Department of Health, the cesarean rate in Miami-Dade County has been steadily growing during the past decade.

Karolina Salas had her first baby two years ago. She had planned with her doctor for a relaxed atmosphere with no drugs and, most importantly, no surgery.

But after her water broke in the hospital, her doctor said a C-section would be necessary because the circumstances were getting dangerous.

Salas had a fever and her baby’s head was against her back, a position that often results in longer labor. Her doctor told her a C-section was necessary due to these factors.

A survey by the American College of Obstetricians and Gynecologists showed 39 percent of Florida physicians stopped offering or performing vaginal births out of fear of lawsuits.

Dr. Christina Peña is an OBGYN at Kendall Regional Medical Center, which has the state’s highest rate of C-sections — 64 percent.

But there are risks to unnecessary C-sections, too: bleeding, infections and scar tissue.

Kendall Regional knows the problem and has changed its guidelines to avoid C-sections. Doctors and staff now meet on a monthly basis and -- except in an emergency -- can’t induce any patient before 39 weeks. 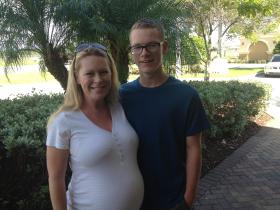 But Dr. Salih Yasin, director of obstetrics and patient safety at Jackson Memorial Hospital, says some South Florida mothers ask for a C-section.

“They feel that this would be less dramatic, no pain, no issues with their body,” says Dr. Yasin.

Jamie Arratia, 38, gave birth to a baby girl in August--it was her second planned C-section. Seventeen years ago she had struggled with her first delivery during a natural birth.

“I was afraid of tearing something open or being stuck with the same predicament of my son which was five hours of pushing,” she said. “So I didn’t want to go that route again if I didn’t have to.”

Arratia says she also planned a C-section this time to have her tubes tied.

Manny Fermin, director for the Healthy Start Coalition of Miami-Dade County, says the decision to perform a Cesarean is also influenced by time.

“In a 10-hour block of time you don’t know how long that lady is going to take before she gives birth... but you are there,” says Fermin.

He says in the time it takes doctors to deliver one natural birth, they could do up to 10 C-sections.

But efficiency is not what some patients, like Salas, are thinking about.

According to research from the National Partnership for Women and Families, more than half of mothers feel frightened during a C-section.

When the nurses prepped Salas for her surgery, they tied her hands to the bed so she wouldn’t touch her body as the doctor cut her open.

"The sensation was weird, it was like somebody was playing with my guts,” Salas says.

She still had her hands tied when they placed the baby on her breasts.

“It was not what I wanted,” says Salas.

And Dr. Peña says it's not what a lot of mothers want.

“The patients I'm seeing now are really determined to do things as natural as possible,” says Peña.

This year, the American College of Obstetricians and Gynecologists released new guidelines to prevent first time mothers from having a cesarean.

The big change: It wants doctors to give mothers more time during labor.

“We need to be a little bit more patient. Not to call, “Oh the baby is stressed, let’s jump to have a C-section,'” says Dr. Yasin.

Close to 50 Florida hospitals have successfully reined in a practice that can cause big problems: Deliberately delivering an infant before the completion of the 39th week of pregnancy.

The American College of Obstetricians and Gynecologists and the March of Dimes are giving a banner of recognition that says "Healthy Babies Are Worth the Wait" to each hospital that meet the criteria, according to a news release from March of Dimes.

In a new study on obstetrics and patient safety, Consumer Reports has given 50 Florida hospitals the worst possible rating: the dreaded black dot. That's almost half of the hospitals that have obstetrics services in the state.

When Jamie Winn prepared to deliver, she didn't pack a bag or head to the hospital. She and husband Justin invited a midwife into their Temple Terrace home.

"My entire life, I had always assumed that when I did decide to have children, I would have a hospital birth. I never considered any alternative," she said.

Women with low-risk pregnancies should be allowed to spend more time in labor, to reduce the risk of having an unnecessary C-section, the nation's obstetricians say.

Baby Bust: Why The U.S. Birth Rate Is Declining