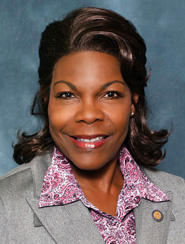 State Sen. Audrey Gibson, D-Jacksonville, is sponsoring a measure that would allow Florida residents to petition a judge for a protective order against a family member who owns a gun, if that person is proven to be a danger to themselves or others.

Gibson is filing the measure for the second year in a row and if it becomes law, it would set up a process for concerned people to petition a judge for another person’s firearms to be temporarily confiscated. It would also prevent them from purchasing others.

“It speaks to, not just domestic violence issues, but mental health issues as well,” Gibson said.

Both the Senate and House versions of the bill died in their first committees last session, as the Republican-controlled chambers have traditionally been reluctant to approve new gun regulations.

Opponents to the measure argue it limits a citizen’s Second Amendment rights, but Gibson said the process set forth in her proposal strikes a delicate balance between constitutional rights and public safety.

“There is opportunity for redress and it’s a temporary situation in an effort to also, if necessary, have the individual get the help they may need,” she said. “It’s really focused on making sure families who may be on the other side of behaviors that they notice could end in gun violence.”

Gun owners are more likely to turn their guns on themselves than use them to protect against a threat, according to data from the Centers for Disease Control and Prevention. In 2015, the CDC recorded that 22,018 people used a firearm to commit suicide, while only 484 people were shot and killed by someone in self-defense.

Reporter Ryan Benk can be reached at rbenk@wjct.org, 904-358-6319 or on Twitter @RyanMichaelBenk

Gun Show In Fort Myers One Week After Vegas

Hundreds of people flocked to a gun show in Fort Myers this past weekend. Sunday also marked a week since the largest recorded mass shooting in modern U.S. history, where 58 people were shot and killed at a music festival in Las Vegas.

Listen
Listening...
/
Click here to listen to the radio version.

Republican Curbelo: 'We Need To Provide Some Answers' On Gun Safety After Las Vegas Mass Shooting

South Florida Republican U.S. Rep. Carlos Curbelo  says he is ready to revisit the issue of gun safety in an interview with WLRN's Sundial.

This puts him at odds with his party's leadership in Congress.

During an interview with host Luis Hernandez, Curbelo said, "Right now the best candidate for a common denominator is to focus on these bump stock devices which are so deadly and so potent."

Senate Judiciary Chairman Greg Steube, who filed a string of firearm-related bills that died during the 2017 legislative session, has reintroduced two — focused on courthouses and private businesses — as lawmakers begin submitting bills for the 2018 session.