Grandparents To Protest For Gun Reform At Sun City Center

After the deadly school shooting in Parkland, teenage voices rang through the television sets, radios and newspapers of senior citizens in Sun City Center.

On Saturday, some of those seniors are holding a rally to show their support.

Listen
Listening...
/
After the deadly school shooting in Parkland, teenage voices rang through the television sets, radios and newspapers of senior citizens in Sun City Center. WUSF's Tim Fanning reports that some seniors are holding a rally Saturday to show their support.

“These are our grandkids, and I want them to know that we, as seniors and as grandparents, support what they're doing," said Judy Kramer, as she sifted through about 40 homemade picket signs in her kitchen.

She’s 76 and lives in the age-restricted community with her husband Oscar. He’s 79. They and other six other seniors have reached out to local organizations and churches to help call attention to the rally.

“We’re hoping to draw not only the seniors who live in Sun City Center, but we’d like to see some of the young people who have been demonstrating in the area around here,” Oscar said. “They’re so eloquent in their comments about what they want to see done to stop this gun violence.” 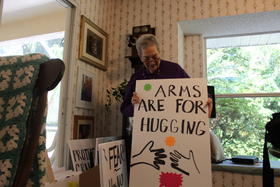 Oscar sat at the dining room table, surrounded by photos of their three grown children and five grandkids on the walls. He was moved to action after listening to Zoe, his 6-year-old granddaughter, describe how she felt after an active shooter drill at her school.

“She was crammed under her teacher’s desk, hiding from the potential shooter,” Oscar said. "She was terrified, and that is not something kids should have to face.”

Zoe and her sister Jayden, 9, will also be demonstrating.

Judy said the group's efforts have been met with mostly positive reactions.

“It can be a controversial issue, and we are aware of that,” Judy said. “We recognize the possibility that there might be counter-protesters, because some feel differently than we do.” 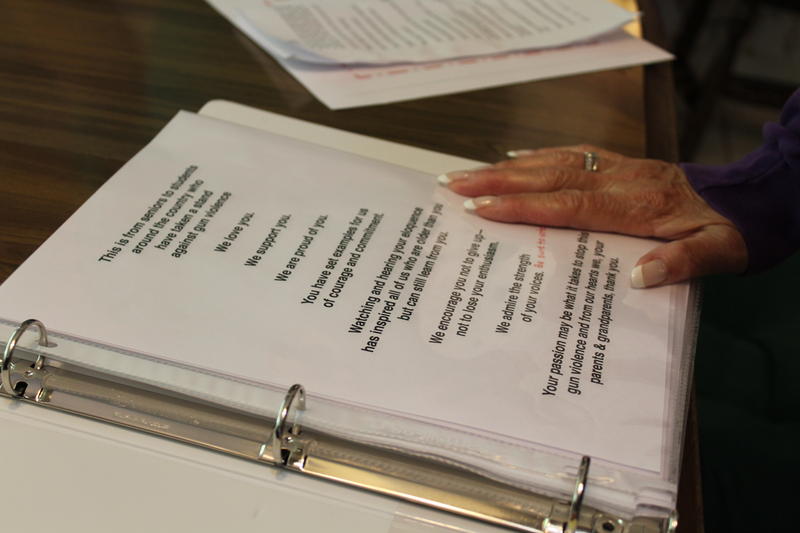 Judy hopes the rally will do one more thing: Help inspire more young people to vote.

"Arm themselves with a vote. A vote can be as powerful as a bullet,” she said. “They have a weapon — and it’s their registration and their voting.”

The rally will be 11 a.m. to 1 p.m. Saturday at the intersection of Kings Boulevard and Route 674.

A teenager who took five bullets in the Florida school mass shooting has become the first victim of the Valentine's Day rampage to file a lawsuit.

As Parkland Students Head To Tallahassee, Some Call Them 'Naive' For Gun Control Views

Following last week’s mass school shooting, about 100 Parkland students are expected to come to Tallahassee this week to speak to Florida lawmakers about gun control. It comes just as an NRA-backed bill was withdrawn from consideration. But, some may see the student’s gun control views as a bit “naive.”

Dead bodies were still inside Marjory Stoneman Douglas High School when survivors of this week's shooting began speaking out about gun violence. It seemed as if the teens had stepped straight from the bullet-scarred school into the nation's gun debate.

Parents of students who died in the Parkland, Florida, school shooting are calling for a range of steps to prevent gun violence, including measures to "harden" schools to minimize attacks and to identify potential shooters before they act.