Gov. Rick Scott was in Fort Myers on Friday, talking about Zika virus preparations in the state. Zika is linked to deformities in unborn babies. It’s a mosquito-borne virus, but Florida’s more than 90 cases are so far only travel-related. The governor said he’s ready for the possibility of Zika-infected mosquitoes to cross over state lines. 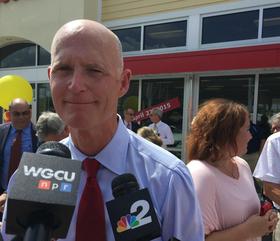 Scott said he’s already working with every county on the Zika virus. But he was in Lee County, specifically, to talk with its mosquito control board. He said it’s so respectable, he wanted to hear their ideas in case mosquitoes start spreading Zika locally.

"We're blessed that the only thing that's happened is travel-related Zika," said Scott. "But the first thing we have to do, is monitor it and then the next thing we do is continue what like Lee County does already with their spraying. And if you find a case, even if it's travel-related, which the mosquito board is already doing, go in and make sure it doesn’t spread."

Scott said he’ll continue coordinating with local mosquito boards and with the agriculture department to keep people informed and to prevent a statewide epidemic.

Lee County Mosquito Control District said it plans to set mosquito traps in areas suspected of transmitting Zika. Then after testing and confirming the regions are contaminated, the county will initiate sprays.

Puerto Rico announced Friday that it has recorded the first Zika-related U.S. death amid an outbreak of the mosquito-borne virus in the U.S. territory.

While Florida has about a quarter of the almost 400 reported cases of Zika in the United States, no one has been infected in Florida. But that's not stopping local public health experts from advising people to protect themselves.

Billy Ryan visits Roy's Trailer Park on Florida's Stock Island every two months. It's part of his regular rounds as an inspector for the Florida Keys Mosquito Control District.

"Hey, I'm just checking on the yards for the mosquito control," he tells one resident, Marie Baptiste, as he heads into her yard. "OK?" No problem, she tells him.

Players from the Miami Marlins and Pittsburgh Pirates have expressed concerns about their two-game series next month in Puerto Rico because of the Zika virus.

The government urged health officials around the country Friday to get ready now in case there are outbreaks of the mosquito-borne Zika virus in the U.S. this summer.

FDA: No Significant Impact From Test Of Modified Mosquitoes

A field trial releasing genetically modified mosquitoes in the Florida Keys would not harm humans or the environment, according to documents released Friday by the U.S. Food and Drug Administration.

While the FDA has released a preliminary finding of no significant impact from a proposed test of genetically modified mosquitoes in the Florida Keys, many in the neighborhood where the test would take place are opposed to the plan.

Oxitec, the company that makes the genetically modified version of aedes aegypti, is holding two public meetings in Key West this week to answer questions from the public, especially those in Key Haven. That neighborhood, a peninsula about five miles from Key West, is the proposed testing site.

Attacking Zika At The Source

A genetically engineered mosquito could stop the Zika virus from spreading.