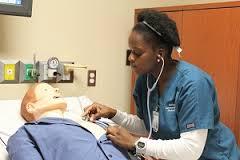 Florida’s public university system is developing a program to address a shortage in nurses. The American Academy of Nursing has projected a shortfall extending through 2030.

Florida’s population is growing. It’s also getting older. And more people have health insurance. That’s driving demand for healthcare services, and just as there is a need for more physicians, there’s also a need for more nurses. 10 of Florida’s 12 public universities offer nursing programs. And many of the state’s community colleges do too. But Ed Morton, a member of the state’s university system has some questions for those presidents:

There’s a big demand for nurses with bachelor’s degrees. And while there are programs in nearly every college, each is different. Then there’s the problem of finding teachers. To teach a nurse  you have to be a nurse. And to recruit teachers you have to pay them, says Kathy Robinson, a registered nurse and board of governors member.

“We’re starting them around $50 [thousand dollars], which is what our baccalaureate graduates get. A top professor could earn maybe $120 [thousand] to $130 [thousand], which isn’t hard for a nurse practitioner to earn in regular practice,” said Robinson.

She says a nurse recently turned down a teaching offer because the salary was too low: There are also problems with access to clinical training spaces—private, for-profit schools often pay for space for their students, but then those students are restricted in what they can do. Universities can do a lot in simulation labs, but their students need real-world training.  Meanwhile, board member Deborah Jordan notes the nursing and physician shortage is not just a Florida problem.

“I know in Massachusetts, where I have two friends who are nurses, they can--to your point Kathy--They can go wherever they want and work and ask for and demand a salary because they’ve been doing it a long time and they’re valued. They’re [Massachusetts] is just not producing enough nurses.”

The Board of Governors plans to ask the Florida legislature for a one-time influx of $15 million for a nursing faculty incentive program. The money would go toward recruiting and keeping nursing faculty at the state’s public universities.

Multi-State Nurse Licenses On The Move In Senate

A bill intended to improve nursing education continued to make its way through the Florida Legislature this week, but it picked up an amendment that would seem to undermine its intent.