At least 157,000 kids in Florida could lose food stamps under legislation moving in a Florida House committee Thursday. 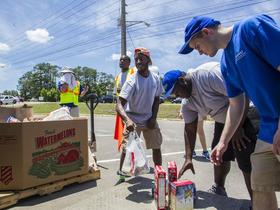 “This was an issue that I really dug deep into before filing this bill," he said about the number of kids who would become ineligible. "And I saw exactly what the impact would be and was able to get comfortable that it’s not going to be really all that meaningful on those kids."

The total of people potentially cut off is at least 229,000 Floridians. White said the parents make enough money to support their children.

“We’re talking about the highest income portion, so 130 to 200 percent of the poverty level," he said.

It’s not clear the proposal will save the state money. Florida would give up nearly $28 million in federal matching funds. The bill analysis shows the state could spend tens of millions to check each applicant’s value of their assets.

About 300,000 Floridians who qualified for food stamps now face a work requirement that went into effect Jan. 1 -- and the possibility of at least temporarily losing benefits if they don't meet the guidelines.

On paper, Florida’s economy has recovered since the great recession. But that progress isn’t obvious looking at the state’s public assistance enrollment.

Hundreds Of Thousands Have Lost Food Stamps In Florida