Finding A Doc Could Be Next Hurdle For Medical Pot 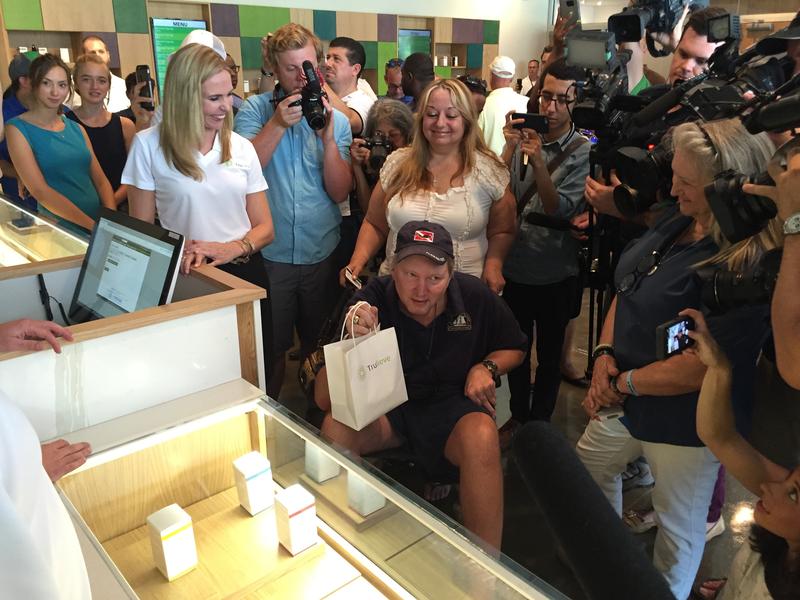 The state’s first medical marijuana dispensary opened this week in Tallahassee.  After two years of waiting, patients throughout Florida will be able to get the drug, but there are new challenges ahead.

This week Dallas Nagy, wheelchair bound, sat patiently as Trulieve opened its doors.  At the counter he clutched sixty dollars in cash tightly as camera shutters clicked.  Nagy has been waiting for this for a long time—some might say too long.

But when the moment finally came, and the dispensary manager took his money, Nagy couldn’t help cracking a joke, grumbling “where’s my stuff?” when the manager didn’t hand over the bag.

The ribbon cutting at Trulieve isn’t historic.  Patients can already get medical marijuana in 24 other states—a 25th joins the bunch in September.  Four of them now allow recreational marijuana, and another four have measures on this November’s ballot to join them.  But, all the same, for Florida’s patients the dispensary makes good on a promise two years old.

For George Hackney—the nurseryman who’s behind Trulieve—it’s an unexpected venture.

State law limited eligible growers to nurseries in operation for thirty years or more.  Hackney’s operation qualified, but he says at first he didn’t jump at the opportunity.  It took conversations with family members who work in oncology before he decided to make a bid for one of the state’s first five licenses.

“Seems like everybody you talk to has got a family member who could’ve benefited from medical cannabis at some point in time,” Hackney says, “but it wasn’t available for them.”

“I’ll tell you what,” he goes on, “once it was announced in the news that we were selected, I got a very nice handwritten letter from a former minister of ours, congratulating me, telling me how wonderful it was, and how his daughter had been through cancer and how much it would’ve helped her.”

Under the state’s current system, patients are limited to people with chronic seizures or terminal illnesses, so the dispensary caters to a number of different routes of administration.  But most rely on oil.

“So that we leave the green matter behind.”

Trulieve is planning to open 10 to 12 stores throughout the state over the next year.  Another dispensary Surterra will begin home delivery in days and they’re planning to open a Tampa storefront within a month.  But the dispensaries’ optimism is tempered somewhat by new hurdles rushing up to meet them.

“One of the biggest bottlenecks has been research,” regulated industries lawyer Richard Blau says.

With marijuana federally classified as a schedule one drug, research funding in the U.S. has been scarce Blau says.   Without research doctors may be reluctant to go through the education and registration process required to order the treatment for their patients.

“As for the doctors who would be in a position to refer qualifying patients,” he goes on, “it has been a slow process, but I think you’re beginning to see an acceleration.”

While dispensaries and activists encourage doctors to get on the compassionate use registry, they’re also eyeing this November’s medical marijuana ballot initiative.  If Florida voters approve the measure the scope of eligible patients could expand greatly—including people suffering from a number of other debilitating conditions.

Florida's Department of Health has granted its second dispensing authorization for medical marijuana and its location will be in Tampa.

As pot shops start to sprout in Florida, cities are struggling with how --- or whether --- to regulate the state's new marijuana industry.

The first medical marijuana dispensary in Florida is slated to open.