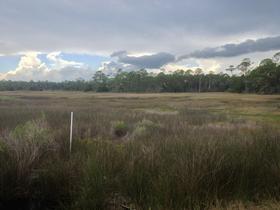 Florida’s Department of Environmental Protection is applying to take over duties from the federal government related to protecting its wetlands. But some environmental advocates are hoping the agency will pump the breaks.

The federal Clean Water Act’s 404 permitting program makes sure any actions by a person or entity that could potentially harm wetlands are mitigated. And environmentalists aren’t sure that would happen under state control. Chris Farrell, Audubon’s Northeast Florida Policy Associate, says he’s not fully convinced it will be a smooth transition. For that reason, Audubon is asking for more time and discussion before the move.

"For the state to take over this process is a big endeavor. One they’ve considered doing in the past and declined because of the size of the effort involved," Farrell said. "And they weren’t sure if they could replace everything the federal government does when they review these permits."

Farrell says Audubon recently sent a letter to the DEP in an effort to make sure all the right questions have been asked before proceeding.

"The Department of Environmental Protection has been moving forward very rapidly in an attempt to assume it. And our letter was to say, we should have more of a public discussion. Is this the right thing to do? Are we going to be able to replace those federal resources? And what would be the best way for the state to take over," Farrell said.

The federal government’s permitting program has been done by the U.S. Army Corps of Engineers for many years. Specifically, it pertains to “dredge and fill” activities, which can discharge debris into water. When the Army issues permits, it includes the U.S. Fish and Wildlife Service and other federal agencies in helping evaluate them. The state DEP hopes to submit its application in the fall of this year.

Florida environmentalists are up in arms over the rollback of former President Barack Obama’s expansion of the Clean Water Act. The controversial regulation extended federal jurisdiction to small waterways, but it was on hold pending industry legal challenges.

The Trump Administration is rolling back a federal rule that protects small waterways like wetlands and creeks. One expert says the move could leave more Florida farmers and conservationists stuck in court battles.