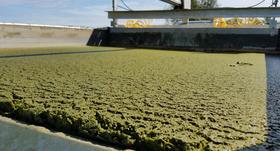 Florida’s problem with algal blooms has taken center stage, and efforts to mitigate it are in high demand. A partnership between two engineering and bioplastics companies aims to bring a new type of solution to the market. One Florida county is already trying it out.

Lee County isn’t the only in Florida, or even in the U.S., with an algal bloom problem. Captains for Clean Water co-founder Daniel Andrews has been keeping an eye on the situation locally.

“What we see now is an ongoing red tide bloom. All these nutrients that are coming from the water from Lake Okeechobee, the cyanobacteria bloom, from the on-the-ground perspective, it appears to be compounding and making it significantly worse. What we’re seeing is collapse,” Andrews told WGCU’s Julie Glenn. “And what we need is solutions, long-term solutions, that will allow this estuary an opportunity to recover.” 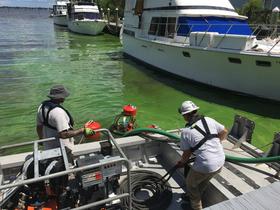 Lee County is one of the first to use a system of algae removal developed by global engineering firm AECOM, recently named by Bloomberg as the world’s largest. With about $700,000 in funding from the state’s Department of Environmental Protection, the county is contracting with AECOM.

Dan Levy, the firm’s vice president, says the technology has been in the works for some time.

“A lot of effort has been put forward on the academia side, on research and studying it. What we’re trying to do now is bringing it to the field,” Levy said. “And that led us to the development of these semi-permanent systems that could be put into these areas that have nutrient-impacted lakes – eutrophic lakes, where we have an excessive amount of nutrients – to go in there and do something that we consider to be short time. Meaning (in) six months, a few years, and we can reduce enough of the nutrients to restore the lake back to its healthier state.”

As Levy explains, the process removes the rich element of algae cells from what’s called the phototropic zone. It’s a nearly one-foot layer below the water's surface. 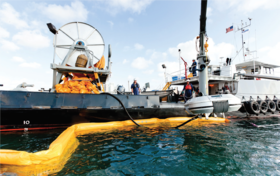 “As we pull the water out from this phototrophic zone, it’s going to go into a containment system that has micro-bubbles on the bottom,” Levy said. “So as the water’s there, we’re going to be adding a polymer to it that will allow it to bind up the algae cells. And this microbubble system on the bottom will create essentially a lift to allow these now foreign particles to float up to the top.”

And that, according to Levy, is when the algae can be removed.

“We’re then able to essentially skim off that top layer, and the remaining water is then filtered and returned back,” Levy said.

The recovered algae biomass is put into a storage unit. Then, the question facing Levy and others is, what to do with the algae once it’s extracted? For that, he turned to a company called Bloom, which has been turning algae into biofoam for use in products like shoes and surf board mats.

For Ryan Hunt, Bloom’s Chief Technology Officer, this is the culmination of years of research.

“I co-founded Algix, which is the parent company of Bloom, in 2010. And that was spun off out of research I was doing at the University of Georgia,” Hunt said. “And so, our goal was using algae to treat wastewater and absorb nitrates and phosphates from the water and Co2 from the air –or Co2 dissolved from the water – and convert those pollutants, those nutrients into something of value.”

It was something of an accident, Hunt says, that he discovered algae is well suited to be converted to biofoam. 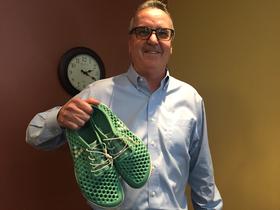 “Before I started doing this, I was actually making small, little samples that were 100 percent blue-green algae, like spirulina, and was compressing them, applying heat, and making little compressed bars. And those bars essentially exhibited some thermoplastic-like qualities,” Hunt said.

And the resulting biofoam doesn’t have the toxic properties that some algae species carry, according to Hunt.

“Detectable levels of microcystin are far below even the Oregon limit for eating algae,” Hunt said. “So theoretically, if you wanted to you could actually eat the shoe and still be in compliance with the Oregon law, but I don’t recommend doing that.”

A spokesman for Lee County says it is currently “working on the best way to quantify” the project’s results. Because algae mitigation efforts in Lee County are being expedited due to severity, the algae harvested from those waterways will not be given to Bloom to convert to biofoam. But, the companies plan to work together on future projects.

As they address environmental issues on the campaign trail, Florida’s gubernatorial candidates are all for doing what is necessary to eliminate toxic algae outbreaks and for preserving natural springs and rivers.

Last week, Gov. Rick Scott ordered a state of emergency for seven counties around Lake Okeechobee as a result of toxic algae blooms. Now the Army Corps of Engineers is releasing water from the lake because the algae has spread to both Florida coasts, hurting home values, tourism and local businesses.