TweetShareGoogle+Email
Listen
Listening...
/
Click here to listen to the audio version of this story.

On May 19, Fort Lauderdale police officers and city workers showed up without notice at Stranahan Park with dozens of blue trash bins, a front-end loader and a dump truck. They ordered all the homeless living there to put their stuff in the bins; the rest of the stuff was scooped up by the loader and thrown in the dump truck.

This raid has resulted in yet another lawsuit against the city based on policies and actions targeting the resident homeless community.

Before the sweep, an officer addressed those in the park, explaining that the city had to close the park because of concerns about a rat infestation.

“It’s never meant to throw you out of here and arbitrarily kick you out. Unfortunately the park is going to be closed for at least 30 days to eradicate the problem,” said the officer, who was  filmed by one of the homeless onlookers.

The city was responding to  a Notice of Violation from the Department of Health for the rodent problem.  City workers  gave everyone there a week-long voucher to stay in a motel. They could go wherever they wanted; they just couldn’t be in the park.

“When we walk up, [there’s] police, trucks, bulldozers and it’s crazy mayhem out here,” said Eric Townsend, who has lived at Stranahan for half a year. “We come up and everything is all gone.” 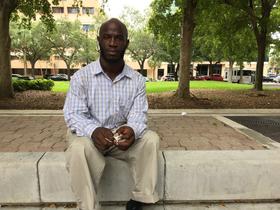 Everything was gone from the part of the sidewalk where Eric Townsend slept: ID, Social Security card, bedding, clothes and work boots. He wasn’t there when the city workers showed up to pack up his stuff, so it was treated like trash, thrown in the dump truck.

“My stuff is stuff to help me get jobs and stuff,” said Townsend. “Now who [is] going to pay for that?”

“They don’t give a f---k about nobody out here. They just look down on us just because we [are] out here sleeping on the sidewalk,” adds Townsend.

After news of the clear-out spread, Jackie Azis with the American Civil Liberties Union helped file a lawsuit on behalf of  Townsend and the other people living in Stranahan Park whose belongings were thrown away. The suit alleges what Fort Lauderdale did violates Fourth Amendment protections against unlawful seizures and also violates due process as protected by the 14th Amendment. 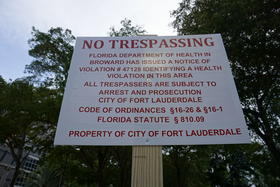 “Our plaintiffs are human beings,  and just like anyone else wouldn't want the government coming into their home or interrupting a picnic that you're having at the park,” said Azis.

She says even if someone is loitering and keeping things on public property the government can’t just take it and destroy it.

“All our plaintiffs are asking is that the government not unlawfully seize their items and their prized possessions,” Azis adds.

Fort Lauderdale has been in the spotlight  over the years for how it deals with its homeless population, embarrassed on national television and in international headlines. In 2014, the city arrested a 90-year-old man for serving food to those living on the streets and cops were quoted as having said “drop that plate” before the man was  fingerprinted, wearing his white chef’s coat.

That landed the city on national television, in international headlines and on the late-night show "Colbert Report."

A spokesperson for Fort Lauderdale declined an interview about this latest case. The city doesn’t comment on pending litigation, but in its response to the suit, the city alleges the homeless don’t have a right to store their personal property on public land.

The response adds that the city followed proper protocol in dealing with a health problem. It doesn’t need to give notice and it has the right to just go in and clean up an area.

That’s what the two sides don’t agree on.

What happened at Stranahan Park wasn’t about getting rid of the homeless. It was a very real sanitation issue. However, the city of Fort Lauderdale asked for that health code violation from state health officials.

That request came five days after a meeting held next door to Stranahan Park when the mayor of Fort Lauderdale, Jack Seiler,  said this:

“My problem with the homeless is what we’re seeing right here out this window, that is, the negative visual impact of so many homeless in downtown. And we can address taking care of our homeless, which I consider a success. And I think we can address getting rid of the public feedings and the public residences here in this park and I would consider that a success,”  Seiler said.

Homeless advocates believe the health issue was a smokescreen. 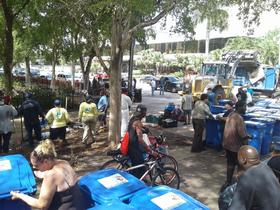 There’s also been some internal questioning within the City Commission. During the  June 6 meeting, Commissioner Dean Trantalis pressed the city manager, Lee Feldman,  about what happened at Stranahan Park.

“In terms of just being fair and humane, would it not have made sense to wait the 24 hours so people could gather their stuff up instead of coming in some sort of lightening-raid there?”

“You hired me to make the decisions and to act in what I believed to be in the interests of [the public’s] health, safety and welfare. I did what I thought was necessary.”

Kirsten Anderson, attorney with the Southern Legal Counsel and the other lawyer representing the homeless at Stranahan, does not think the city’s actions were necessary.

She says city responses like Fort Lauderdale’s are a misguided approach to reducing the visibility of homelessness that runs in the face of more effective methods for providing housing and services. 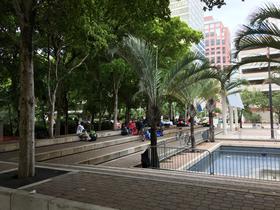 “If you aren't addressing the root causes, the only other choice you have is to pretend like it doesn't exist and you can only do that by trying to make it less visible."

After the weeklong stay in the motel—paid for by the city—the homeless people started coming back. Now most of them have set up again at Stranahan Park, camped out along the orange construction fence erected to keep them out.

Eric Townsend, one of the plaintiffs in the lawsuit against Fort Lauderdale got a job recently. He’ll be working for a phone-banking company.

At night, he’s still sleeping in the park on spare cardboard he found and some new blankets he was given by local charities.

Fort Lauderdale 'Rats' On Self To Evict Homeless From Park

A Florida city called state health inspectors on itself to report rats in a downtown park so it could evict homeless people living there.

A state health inspector cited the city and gave it 30 days to clean the park. Using that citation, Fort Lauderdale ordered 60 people from the park and threw away any belongings that went unclaimed.

Obamacare Helped The Homeless, Who Now Worry About Coverage Repeal

Everyone expects Congress to change the Affordable Care Act, but no one knows exactly how.

The uncertainty has one group of people, the homeless, especially concerned. Many received health coverage for the first time under Obamacare; now they're worried it will disappear.

Joseph Funn, homeless for almost 20 years, says his body took a beating while he lived on the street.

Now, he sees nurse practitioner Amber Richert fairly regularly at the Health Care for the Homeless clinic in Baltimore.

Homelessness is on the decline across the United States. In Florida, the homeless population decreased at a record rate in the last year, with more than 2,300 homeless Floridians moving into shelter in 2016. Invisible among these encouraging numbers, however, are the growing number of homeless teenagers in the state.