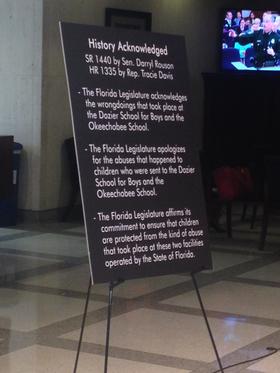 Two bills offering a formal apology to former wards who say they were abused in a Panhandle reform school and creates memorials for those buried on the property passed their first House committee Thursday. After hearing some horrific stories, some Florida lawmakers issued apologies of their own.

Over the past decade, many men—former juvenile delinquents of the Dozier School for Boys in Marianna—have come forward. That includes Jerry Cooper, who says he remembers receiving a severe beating when he was 16.

“I got over 100 lashes with a strap from the small of my back to the breaks in my knees. I passed out,” said Cooper. “What woke me up is I started choking on my blood because my mouth was torn to pieces, I had a broken foot, and I had severe lacerations.”

There’s also Robert Straley, who spent 11 months at Dozier. In addition to beatings, he says he was sexually abused at age 13.

“I was taken down twice in the middle of the night by just waking me up,” said Straley. “And, this was Troy Tidwell who said, ‘come with me,’ and took me in there and said I was smoking and if I denied, he was going to take me down. Well, down I went. And, the last thing they did was take me down to an underground room and raped me and molested me. And, I don’t know why they specifically picked on me like that, but a lot of that happened to a lot of the men there.”

And, the abuse claims also surrounded Dozier’s second campus in Okeechobee. Like Marianna’s, it closed in 2011. Terry Levins went to the Okeechobee Boy school in 1963.

“And, it was bad, really bad, but I survived it,” said Levins, during a recent Senate committee hearing. “And, I know both schools were bad. And, I don’t care what school you was in: Dozier or Okeechobee. A beating is a beating. We all went through a lot of pain.”

It's stories like theirs that touched House Judiciary Committee members Thursday so much that some cried, as they issued an apology.

“And, I will also echo what my chairman has said, and give me a moment because I’m still feeling it, we’re sorry,” added the Panel’s Head Democrat Cynthia Stafford (D-Miami). “We apologize.”

“There are no words….that we can offer…but we are sorry,” said Vice Chair Ross Spano (R-Dover).

Others, like Rep. Bill Hager (R-Delray Beach), took up a call by House Speaker Richard Corcoran to pursue the staffers in question, who are still alive today.

“At the end of World War II, there was a Nazi Hunter, and he pursued Nazis all over the face of the earth,” said Hager. “Seems to me that one of the things that artfully be considered here is that we ought to pursue these Marianna abusers. We need to pursue them in a criminal way, consistent with justice, consistent with due process.”

For now, the panel passed a House resolution by Rep. Tracie Davis (D-Jacksonville) to acknowledge the abuses under the state’s supervision at both Dozier campuses and issue a formal apology via the legislature.

“And, [the bill is] an affirmation of our commitment to ensure that these senseless acts against our children—which are now men—will never occur in a state operated facility again,” Davis said.

Meanwhile, the House committee also passed a measure that goes further. Among its provisions is a final decision not to sell the Dozier property. The issue had turned controversial as the state had initially tried to sell the land, while others wanted to continue the search for other bodies of boys who died from the alleged abuse and are still believed to be buried on the grounds. In recent years, University of South Florida researchers led by Erin Kimmerle recovered the remains of 55.

In addition to setting up memorials in Marianna and Tallahassee recommended by the Dozier Task Force, the bill also allow for the state to come up with a plan to search for more bodies on the property. It’s expected to cost $1.2 million.

Final recommendations on a memorial for the unclaimed remains uncovered on the Dozier School for Boy grounds are now heading to the Florida Legislature. But, during the final meeting of the panel tasked with making those suggestions, tensions were pretty high.

A measure intended to help heal a community and people who suffered at a former reform school where the remains of 51 boys have been unearthed is headed to the desk of Gov. Rick Scott.