The is working on new technology that will detect wrong way drivers on Florida highways. An increase in wrong way collisions has lead to the Howard Frankland Bridge being chosen for the upcoming pilot test.

“Essentially, cameras and software can detect a car going the wrong way and immediately alert the Traffic Management Center. FDOT and Florida Highway Patrol share this location so a trooper could be dispatched right away,” said FDOT spokesman David Botello in an email.

In Arizona, thermal imaging is being used to immediately notify drivers of wrong way motorists via message boards to safely exit the roadways. As ADOT has found, these measures can reduce risk, but can’t prevent wrong way driving.

FDOT is using similar messages on billboards, but is also stressing public involvement in preventing wrong way driving incidents, citing that most of them are DUI related.

“FDOT and FHP are doing everything we can, but we also need the help of the public to make responsible decisions,” said Botello.

According to Florida Highway Safety and Motor Vehicles, wrong way driving usually happens at night. To avoid such collisions, officials recommend maintaining a safe distance from oncoming traffic by staying in the right lane. Motorists are also encouraged to pay attention to message signs and report wrong way drivers to 9-1-1.

The test pilot is expected to occur within the next few weeks. 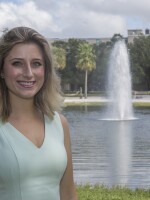 Madeline May
Madeline May is the WUSF/Zimmerman School digital news editor for fall 2018.
See stories by Madeline May
Coronavirus Coverage
Get the latest on the coronavirus pandemic on Health News Florida.
Learn More
Latest Stories