Experts And Activists Coincide: Conversations About HIV/AIDS Should Go Beyond World AIDS Day

World AIDS Day has been celebrated every Dec. 1 since 1988 as a day of remembrance for those whot have died of and those who are living with the disease. There were many events to mark the day in South Florida, from open-air concerts to free testing.  But experts and activists agree that the discussions about treatment and prevention of HIV should be part of an ongoing conversation in the community and not a once-a-year affair.

According to the Centers for Disease Control and Prevention’s (CDC) annual HIV Surveillance Report, Florida has the highest rate of HIV cases in the country. In 2015 more than 103,000 Floridians were living with the virus. Over half of those were in Miami-Dade County alone.

Damian Pardo, co-founder of Forward Miami, said it can be hard to get information to the multiple diverse communities in South Florida.

“If you're doing education prevention and outreach in Miami-Dade County, you need to be speaking in multiple languages: Creole, Spanish; you need to be hitting neighborhoods that are often not even crossed by cars or transit; you need to be talking to people on the street,  and that's very hard work that isn't something you do with an ad on TV,” he said.

Dr. Susanne Dobleki-Lewis, clinical director for the division of infectious diseases at the University of Miami, also pointed out these challenges Miami faces when dealing with HIV/AIDS.

“We really can't have a one size fits all message in Miami. You have to be really quick to locate people who may be at risk when they arrive and let them know about all of the available strategies for prevention. Also, there are many people who are not aware that HIV is still a very active problem in Miami and that the risk of infection here is higher than in other municipalities in the United States. Getting that message out to people who are just arriving and to some people who have been here for some time can be a real challenge,” she said.

For Pardo, who was an AIDS activist with what is now Care Resource for over 30 years, believes that it is imperative to de-stigmatize the conversation around HIV/AIDS because it can be potentially harmful--especially for minorities and LGBTQ people.

“Unfortunately, to this day, people obsess about their HIV status. If you're HIV positive they won't date you. There's no reason for that. And the homophobia that exists doesn't help our community either because instead of being out about your sexuality and taking all the measures to be healthy you're on the down low,” he said.

Dr. Dobleki-Lewis insisted on the importance to get the word out about pre-exposure prophylaxis, more commonly known as PrEP, which is a pill taken by people who do not have the disease but are at very high risk of exposure.

“[PrEP] we now know works extraordinarily well. We know that it's an important part of the toolkit and the challenge is how do we get the message out and how do we implement it here in Miami,” she said.

As for what can be done, Dr. Dobleki-Lewis and Pardo both agree, is for people to continue to be tested--even if you are healthy, and to continue keeping the conversation about HIV/AIDS going not just on Dec. 1 but the other 364 days of the year.

Check out below where you can get tested in Miami-Dade and Broward counties: 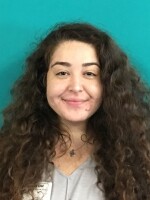 Odalis Garcia
Odalis Garcia is a recent graduate from The New School in New York City where she majored in Journalism with a minor in Religious Studies. Through that she found a love of storytelling. People have so much to say but there are some who are kept quiet or not allowed to have a seat at the table. Odalis hopes to use her work and her words to allow these voices to tell their stories in a fair way. Odalis also spent her time managing the social media for her college and her school's newspaper. It's always the best excuse to have Twitter and Instagram open at all times.
See stories by Odalis Garcia