Gov. Rick Scott declared a state of emergency Tuesday morning because of the number of wildfires burning around Florida.

Officials say wildfires in Florida have already burned 2 1/2 times more land in the first three months of 2017 than during the same period last year. There are more than 100 active wildfires across more than 20,000 acres.

Agriculture Commissioner Adam Putnam says the state hasn't seen this active of a wildfire season since 2011.

"Wildfires are burning more than 20,000 acres in Florida right now, and we haven’t seen this active of a season since 2011," Putnam said in a news release. "From St. George Island in the Panhandle to a wildfire just north of one of the world’s most famous tourist attractions in Orlando, we’re seeing that every area of our state is susceptible to wildfire. I thank Governor Scott for signing this executive order, which will ensure we have every resource available to us to combat these wildfires to protect life, property and wildlife. May God bless our brave firefighters who are working tirelessly to protect us.”

Declaring a state of emergency allows Scott to deploy and use any firefighting forces or resources needed and to help distribute supplies and materials.

As of noon Tuesday, the Florida Forest Service says more than 100 active wildfires are burning across the state. Twenty-five of them are scorching more than 100 acres each.

The largest blaze right now is the one known as the Cowbell Fire in the Big Cypress National Preserve, which has spread to more than 8,000 acres about a mile north of Interstate 75.

A Hernando County brush fire apparently sparked by lightning on Saturday had widened to 1,100 acres by Monday. Forest Service officials say that is now 90 percent contained.

The Suncoast Bike Trail is closed south of State Road 52 and north of the Starkey connection due to the brush fires burning in that area. That section of the trail is barricaded and will be closed until further notice.

The dry conditions mark sharp contrast to 2016, when the state was drenched by two hurricanes.

Here's the release from the Governor's office:

Governor Rick Scott issued Executive Order 17-120 declaring a state of emergency in Florida following the recent wildfires across the state and the high potential for increased wildfires to continue this year. Forecasts predict hotter and drier conditions than normal in Florida during the coming months. Florida wildfires have already burned 250 percent more acreage during the first three months of 2017 than during the same time period last year. There are currently more than 100 active wildfires across more than 20,000 acres in Florida.

Governor Scott said, “As wildfires impact our state, our incredible firefighters and first responders have bravely rushed to aid our communities and worked tirelessly to protect our homes and families. Last month I traveled to Collier County with Commissioner Putnam to see the impacts of one of these wildfires firsthand and we have continued to monitor the growing number of fires across the state. I’ve continued to be in contact with Commissioner Putnam and local officials about the wildfires across the state and today I am declaring a state of emergency in Florida to ensure we are ready to respond to and prepare for these fires.

“Much of Central and South Florida are approaching drought-like conditions and the chances for wildfires are continuing to increase with hotter temperatures and low rainfall. This may only get worse as we enter the hotter summer months and it is crucial that we take every action right now to be prepared. It is incredibly important that wildfire response is swift and deliberate and this state of emergency will make it easier for our state, regional and local agencies to quickly work together to protect our families, visitors and communities.” 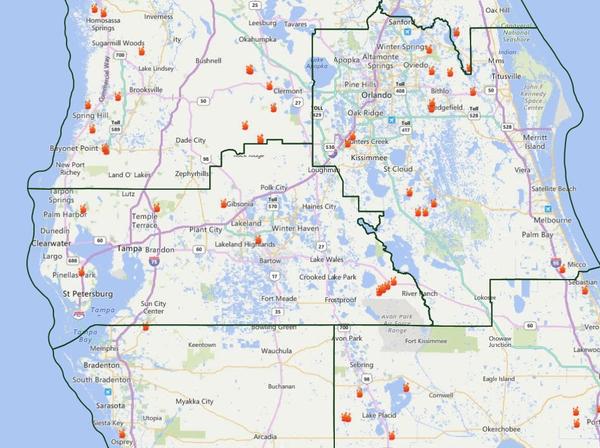 This year the dry season has been abnormally dry, which has earned Southwest Florida the classification of being in a “severe” drought by the National Weather Service. Fire officials say that drought is now prime fuel for wildfires.