TweetShareGoogle+Email
Listen
Listening...
/
Join Dwayne Scheuneman at the Jefferson High School track as he trains for the upcoming wheelchair games.

Ten years ago, Dwayne Scheuneman was competing on the wheelchair racing circuit when he went looking for some cross-training in the off season. The Navy veteran started wheelchair dancing and never returned to the track, until this year. 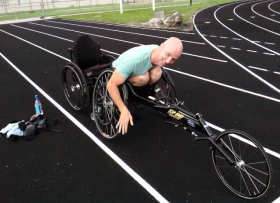 Having the 33rd annual National Veterans Wheelchair Games hosted in the Tampa Bay region was too delicious of an opportunity to pass up.

Scheuneman plans to compete in the 100, 200 and 400 meter races to be held at Jefferson High School track and he’ll play Quad Rugby, the wheelchair form of rugby.

“One of the reasons I’m going out on the rugby court is to show them (the rugby athletes) that a dancer can be just as tough as they are,” Scheuneman said. “And I plan to knock a few of those guys over myself, all in good fun of course.”

“We are just as competitive, train just as hard, the sport is just as tough,” Scheuneman said. 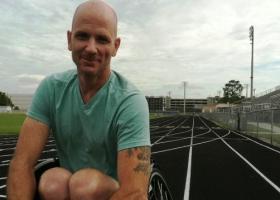 He’s been training since this spring, weight lifting and doing sprints in a racing chair borrowed from the VA. He gave away his track chair when he focused on dance.

And he thinks he’s got a pretty good chance even though he’s not raced for 10 years because dance has maintained his strength and endurance. All that’s left is fine-tuning the racing wheelchair.

When the Games are over, Scheuneman will go back to teacheing dance to children with disabilities as well as able bodied kids. And the 44-year-old has just a year left to earn his degree in elementary education at the University of South Florida St. Petersburg.

All of the wheelchair competitions are open to the public. A schedule of the events from July 13-18 is available here.