Three Reasons Why You Need To Boil Water After A Storm

Dozens of Florida communities were advised to boil their drinking water for a period of time in the aftermath of Hurricane Irma, including in Hollywood, Pembroke Pines and West Palm Beach.

And that got us wondering about what exactly happens during storms that leads a city or town to issue such an order. It turns out that while not all boil water alerts are the same they are usually issued for one of three main reasons.

Florida may be nicknamed the Sunshine State, and that is no doubt apt. But after talking with Kelly Cox, program director of Miami Waterkeeper, let me propose an alternative: “the water state.”

“Our waterways are very, very interconnected in South Florida, said Cox. “In fact, some people like to say that we have more water than we know what to do with.”

The brackish bay water, the freshwater in rivers and lakes, the mixed bag of the Everglades and canals – they are all connected. And all those visible waterways are, in turn, connected to the water underground. That part is important since South Florida’s drinking water comes from an enormous underground Biscayne Aquifer where, frankly, mother nature does a pretty good job of purifying it for us.

"The idea is that the water will fall over the land via rainfall events,'' Cox explained. “Then [it] will slowly trickle down and filter through this porous limestone to the extent where it is clean enough to be used as drinking water.”

These interconnected waterways usually make nice and stay out of each other’s business. That is, until a storm – like say Irma – comes rolling through town. 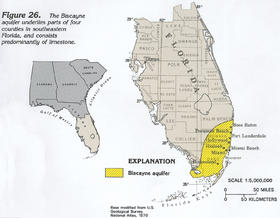 “Unfortunately, what we see during major storm events is that the aquifer and the water level starts to rise, which causes flooding,” Cox said. “Then that flooding from the interior areas mixes with flooding from the storm surge areas along the coast.”

And the chances of cross-contamination go up. We send our sewer water out into the bay. It’s treated first, but only to a point. Enough contaminates are removed by the treatment facilities that the rest will be diluted over time in the vast and churning water. Of course, a storm disrupts that timing. We also keep the industry that might pollute the ground with toxins away from the aquifer, but when everything starts flooding… well, you get the picture.

Still, the water gets treated between the aquifer and our taps, and that means the role of those treatment facilities becomes even more crucial during and after storms. And this brings us to reason No. 2.

“Our utility infrastructure, in so far as electric utilities, fails during storm events,” Cox said.

So, if power goes out and the plant can’t properly treat the water, a precautionary boil alert will be issued. Miami-Dade County was ready for this during Irma. In fact, all of its water treatment plants stayed powered up throughout the storm and its aftermath.

“We actually switched over to generator power the Friday before the storm,” said Jennifer Messemer-Skold, spokesperson for Miami-Dade County’s Water and Sewer Department. “We had enough fuel on hand at our plants to make sure that we were able to be operational even for weeks on end. At no time during hurricane Irma did the Miami-Dade Water and Sewer Department have to issue a precautionary boil-water order.”

But there were boil-water orders in Broward and other counties, and that’s because some things are a little harder to plan for.

The well heads that draw the water out, the thousands of miles of pipes that deliver it: They’re all physical – and getting a little long in the tooth. The average age of the Miami-Dade’s water pipes? 50 years old.

“We do have pipes that are still in service that are in excess of 80 years old,” Messemer-Skold said. “I think Babe Ruth was still playing baseball when some of these pipes were first installed.”

Messemer-Skold said old pipes aren’t necessarily bad pipes, but – old or new – pipes are susceptible to everything from lightning strikes to falling trees to simply buckling under extreme conditions.

“Anything that has moving parts, and the fact that these pipes are pressurized in order to deliver the water from the plants to homes and business, ya know, things do break,” she said.

Crucially, the pressure not only moves the water through the pipes, but it also pushes potential contaminants away and keeps them from penetrating the pipes and dirtying the water. When pipes break, the system pressure can drop. And when system pressure drops below a certain level, you guessed it: boil alert.

As you can see, just like our waterways, the reasons a water boil alert might be ordered in your community during a storm are also complex and interconnected. But one thing is simple: If your town orders one, heed it.

As Food Insecurity Grows After Irma, Gov't Approves Disaster SNAP. But It Will Take Time To Start

Rows of brightly colored chairs are set up on the little patch of grass outside FANM, the Haitian Women of Miami, a non-profit group that helps low-income families.

People sit in the Miami heat--some with toddlers in their laps--waiting to fill out FEMA applications and see what other kinds of help they can get in the wake of Hurricane Irma.

A beachside hospital on Florida's Atlantic Coast remains closed as officials evaluate the damage done to the building by Hurricane Irma.