U.S. Sen. Marco Rubio, R-FL, was in Fort Myers  on Monday discussing solutions for the Lake Okeechobee water crisis. The lake’s freshwater releases have caused damage to both coasts, including the spread of algal blooms.

These storage and treatment plans are included in the Senate’s annual water bill.

Rubio said he wants to focus on completing these projects and the master everglades restoration plan before considering other possibilities.

One possibility would be acquiring land south of Lake Okeechobee that is owned by U.S. Sugar and others. 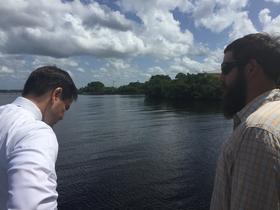 Rubio said getting funds to pay off U.S. Sugar for the land might be a legislative distraction.

“I don’t want somebody from Arkansas or Louisiana or Mississippi to come to me and say, 'Well, we want to help you with your algae problem but now we’re confused because you’re saying you need to do the central Everglades plan or is it the land purchase? Until you guys figure out which is the priority, we’re just not going to give you the money.' That’s what I don’t want to see happen,” he said.

Rubio said the Senate plans to vote on the water bill in September.

Manatees are again dying from a mysterious syndrome in Florida's Indian River Lagoon.

Federal, state and local scientists brought Florida’s freshwater crisis to Washington D.C. on Thursday.  They met with congressmen to talk about the damage.

Tests on blue green algae at the Cape Coral Yacht Club came back with low levels of toxins that can contribute to environmental and public health problems. The Florida Department of Environmental Protection tested the algae earlier this week from two sites along the Caloosahatchee River. The other site, at the Alva Bridge, showed no toxins.

Scientists found blue-green algae again in Southwest Florida waters this week. The toxic algae has been plaguing beaches on the east coast for weeks now.  Experts say this could get worse on both coasts now because of the summer heat.