Much has been said about the plight of disabled, homeless and legally-troubled military veterans. Leon County has a number of resources in place to help those area vets who fall into these categories of need. 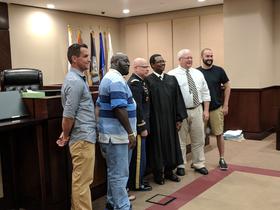 One of these resources happens every Thursday at Tallahassee’s Lake Ella American Legion Home. That’s where and when you’ll find a small army of volunteers – mostly local lawyers like Steve Hurm – ready to help any veteran who happens by. He said he’s been helping out since Leon County’s first Homeless Veterans Stand-Down at the North Florida Fairgrounds in 2013.

“I was asked if I was interested in going out and volunteering for the Stand-Down at that time,” Hurm recalled. “As a matter of fact, I think I was working for Legal Services of North Florida and that’s how I heard about it. I was volunteering with them. And so I went out and just fell in love with these men and women who have served the country and were in need and I’ve been at every Stand-Down since then. And then when the Legal Clinic started, I thought that’s something I’d really enjoy.”

Which is why Hurm and more than a dozen other volunteers were once again at the Clinic on this particular Thursday afternoon.

“We have had over 100 Legal Clinics I believe both here and at the Veterans Health Center. And it’s just been tremendous! You can see we have waves of men and women coming in every week with all sorts of legal issues and we have about 200 lawyers who have volunteered and are on the list, so if we need to refer clients to them for particular areas of the law, that resource is there.”

Among the most pressing matters for many vets, observed Hurm, is obtaining a simple driver license. The state of Florida has a tendency to suspend or revoke those licenses for a wide range of offenses, many of which have nothing to do with driving. As a result, vets can find themselves unable to drive legally, which can be a huge roadblock to everything from getting a job to just living a somewhat normal life. And while it seems just about everyone professes a deep and abiding concern for veterans, Hurm said far too many veterans wind up being victims.

“It’s those issues that are veteran-specific that stand in the way sometimes of them being able to get the help that other people take for granted. And they are sometimes taken advantage of by folks because of those veterans’ issues that they have.”

Another big issue, said legal volunteer Brian Kanz, is how veterans so often victimize themselves. That makes helping solve their problems even more of a challenge.

“And the legal problems are a result of a lifestyle a lot of times that they start living. There are some who are living on the street. And what people don’t know today is that 22 veterans a day commit suicide and it’s overlooked too much because of all the issues that are so much more extreme. Especially for those who have seen battle overseas,” Kanz asserted.

Veteran Skye Mussen has experienced that herself. She’s a disabled combat vet, who is now a law student at Florida State University where she’s vice president of the school’s Collegiate Vets organization. She’s also a regular volunteer at the Legal Clinic.

Mussen insisted it’s not just veterans from the Vietnam War or early years of the Mid-East conflicts that need the Clinic’s help. It’s also more recent re-entrants into civilian life, including those in her generation.

“(Those) who have somehow fallen in between the cracks, which is very easy to do when you’re transitioning from the military to civilian life, either because of a lack of understanding the process – because it is a difficult process – or simply because their demons get too great to deal with by themselves,” she said.

It can be a long and painful road to a more normal life. But for those troubled vets who are willing to undergo the process, there are rewards.

On August 20, 6 military vets who were in trouble with the law got a fresh start after completing the program administered by the Leon County Veterans Treatment Court. The scene was Courtroom 2-E in the Leon County Courthouse. Instead of a prosecutor or defense attorney, the speaker was a soldier: Col. George Brown, Jr., commander of the 83rd Troop Command of the Florida Army National Guard.

“The work of this Veterans Treatment Court is not easy,” he acknowledged during his remarks before the graduates, their family members and others involved in the program. “Nothing worthwhile ever is. And I know that the work of the graduates who are here today is not easy.”

Each of the 6 program graduates at this ceremony had more than their share of trouble in the wake of their military discharge; trouble triggered by substance abuse or destructive relationships. There were arrests and prosecutions. But instead of jail, these vets were given community service time and rehabilitation programs to get them back on track. One of these graduates, who finished the intense 4-phase program in 8 months instead of the usual one-year-or-more, was Kenneth Copeland. Like the other graduates, he publicly thanked the court for giving him another chance.

“I made a bad judgment call and I paid for it,” he acknowledged. “But you can always rebound and come upstanding again.”

Even though the program functions under the auspices of the Second Judicial Circuit, Judge Augustus Aikens who presided over this graduation ceremony, was quick to point out this is a cooperative effort.

“We’ve got good access to the Veterans Clinic here in Tallahassee,” he said after the ceremony. “They provide the services we need. And those service persons who don’t have access to the VA, we find whatever thing in the community that can assist them. And we try to vie that to them, too.”

As a consequence, added Aikens, the Veterans Treatment Court has racked up a very positive track record.

“It seems to be a great success,” he said, adding that more than 80 percent of graduates have avoided further brushes with the law. “The people who come to the program are committed, once they graduate, to break the cycle of recidivism and not come back into the criminal justice system. And they’ve shown that. A lot have come back and offered to serve as mentors for the young fellows to help them deal with substance abuse and mental health issues and those things that affect them and cause them to commit these crimes.”

Those sentiments were echoed by Florida National Guard Col. Brown after his earlier keynote address.

“They’ve proven that they can uphold the values and fulfill an oath and obligation. They’d just maybe forgotten that,” he observed. “So hopefully this program helps them remember that and gives them the tools to cope with and to deal with what they’re trying to deal with. Because it’s more than DUIs and the crimes they may have committed. It’s about healing and this program helps them do that.”

Purple Heart Veteran Washington Sanchez founded the original once-a-year Leon County Veterans’ Stand Down event 5 years ago. He, along with now-retired Leon County Assistant Public Defender Dan Hendrickson and many others, helped that event morph into the ongoing Leon County Veterans’ Treatment Court. Sanchez voiced hope that the concept will spread beyond the nearly two-dozen similar programs that now operate around Florida in order to help even more troubled vets.

“We only have 18,000 here,” he said, referring to the number of military veterans living in Leon County. “But there are some places like Tampa and Pensacola; areas that have 200,000. We have 1.5 million veterans in the state of Florida. That’s 20,000 in some localities that don’t have this kind of a program that isn’t working as effective as we are.”

That’s a circumstance that all of those affiliated with Leon County’s program would like to see changed.

Veterans Push Feds To Recognize Marijuana As A Treatment

Charles Claybaker spent five tours in Afghanistan, kicking in doors and taking out terrorists. But an aircraft crash in 2010 left the Army Ranger with a crushed leg, hip and spine and a traumatic brain injury.

Army doctors loaded him up with a dozen prescriptions to numb the pain and keep his PTSD in check.

U.S. Rep. Charlie Crist was in Largo on Wednesday to introduce legislation that would protect federal employees who use medical marijuana in states where it is legal.

Outpatient Health Clinic For Veterans Will Open In Orange Park