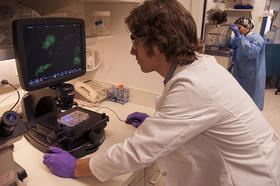 The Florida House has passed a bill that creates the “Right to Try Act.”  The legislation gives dying patients a chance to try treatments that have undergone clinical trials but haven’t been approved by the Food and Drug Administration.

Patients who’ve been diagnosed as having less than a year to live would be eligible for the experimental treatments.

Rep. Dennis Baxley (R-Ocala) says these drugs may someday help his daughter. She has Huntington’s Disease, a condition that causes the brain's nerve cells to break down.

“There are drugs in trial in California that within five years will be on the market,” Baxley told lawmakers. “Under your bill, she could live long enough to truly benefit from those.”

The most personal testimony came from Rep. Debbie Mayfield (R-Vero Beach). Her husband, Rep. Stan Mayfield, was diagnosed with cancer eight years ago and given three months to live. A clinical trial in Texas extended his life by 18 months. But when the trial was over, Mayfield’s time ran out.

Unlike the Senate proposal, the House version of the bill does not include medical marijuana. An attempt to add the marijuana provision was withdrawn out of concern that it would weaken support for the overall bill.

The Senate version has passed all of its committees and is ready for floor debate.

House to Back Experimental Drug Bill

The House appears poised to approve a bill that could help clear the way for terminally ill patients to use experimental drugs -- but the measure will not include medical marijuana.

House members Wednesday took up the bill (HB 269), filed by Rep. Ray Pilon, R-Sarasota, and could approve it as early as Thursday. Dubbed the "Right to Try Act," the bill would help make available experimental drugs to people who have terminal illnesses and are expected to die within one year.

The  Florida Senate Health Policy Committee passed a bill Tuesday that will establish the "Florida Right to Try Act."

SB 1052 will allow patients diagnosed with a terminal illness to explore products and treatments that are currently under clinical trial, but not yet FDA approved. It also would protect a physician recommending certain treatment options.