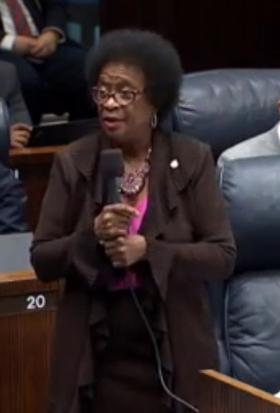 The Florida Senate has passed a bill allowing the state to provide financial help to the families who want to rebury the remains of their loved ones, found on the Panhandle property of the former Dozier School for Boys. Its House counterpart is also heading to the floor.

Senate Democratic Leader Arthenia Joyner (D-Tampa) says throughout her life, she’d heard of the alleged horrors that occurred at the Dozier School for Boys—while it was still up and running decades ago.

“But, I was recent college graduate, young woman with no influence and nothing that I could do, but listen and try to console them as they told about the many things that happened at Marianna: the beatings, the segregation, the disappearance of some of the boys,” she said.

Now, as a lawmaker, Joyner says she can do something about it. For the past couple of years, University of South Florida researchers have exhumed the remains of boys believed to have died and were buried on the property because of alleged abuse. Of the 51 remains found, seven have been positively ID using DNA.

Reburial efforts are costly for the families and questions remain with what to do with the unclaimed remains. A bill by Joyner seeks to address those concerns.

“I’m just happy to see that we’re at a point where we can at least bring some relief those families and provide for them to re-inter the bodies of the remains that have been identified and to establish a task force that will determine a proper memorial and location of the memorial,” she added. “The task force will be chaired by the Secretary of the State and there will be other stakeholders selected by some of the other Cabinet members.”

“The Dozier School is located in Jackson County in Marianna and that’s in my district, and Senator Joyner knows there’s one issue I’d like to place on the record,” said Former Senate President Don Gaetz (R-Niceville).

The Niceville Republican says while he understands and supports Joyner’s overall bill, there’s something else he’d like to see in her proposal.

“The Dozier School property has about 1,300 acres,” Gaetz added. “About 10 percent of that acreage was actually used for the school. An issue that needs to be remembered is that the rest of the acreage, probably more than a thousand acres, still is acreage that is technically owned by the state. But, ultimately, that property should not lie fallow and ought to be used for civic or educational or recreational or economic development purposes.”

Still, he acknowledged that the researchers had found toxic areas of the property, and an in-depth environmental study has not yet been completed. But, his hope is future lawmakers will address his issue.

But, Joyner says while she shares Gaetz’ concerns, she says it’s really up to another party.

“Your concerns were also mine and that’s why I inquired as we developed the legislation, and I know that the Cabinet is taking this all under consideration and they will make the decision about the development of the property,” Joyner replied.

And, all 40 Senators voted unanimously for her bill.

Meanwhile, Rep. Ed Narain’s (D-Tampa) bill encountered some resistance in its second committee hearing. And, when he presented before House members of the bill’s last committee stop Thursday, Narain tried to put lawmakers’ minds at ease.

“I want to be very clear that the bill as it’s been heard in the last two committees and is being presented today is not a claims bill,” he said. “This is a bill that simply will allow the Florida Legislature to allocate up to $7,500 to the families that may have lost a loved one at Dozier to conduct a proper burial service. This is not something that puts a black eye on Florida. It’s actually something that puts us in a proper posture to do right by the families and do the right thing for the state, given the circumstances of what has occurred.”

And, his bill passed the House State Affairs Committee unanimously, sending it on to the floor.

"There's just too many stories," Roger Kiser, who was at the school in the 1950s, told NPR in 2012. "I know of one [boy] that I personally saw die in the bathtub that had been beaten half to death. I thought he'd been mauled by the dogs because I thought he had ran. I never did find out the true story on that. There was the boy I saw who was dead who came out of the dryer. They put him in one of those large dryers."

Listen
Listening...
/
WUSF's Mark Schreiner talks about some of the findings presented in USF's final report on remains found on the grounds of the Dozier School for Boys in Marianna.