Florida’s Goliath Grouper Is As Big As A Grizzly Bear. And Officials Say It’s Still Off Limits.

There will be no harvesting of Goliath Grouper in Florida, for now.

The Florida Fish and Wildlife Conservation Commission rejected a proposal for a limited harvest of 100 grouper per year at a meeting in Fort Lauderdale Thursday, citing uncertain data about the true health and numbers of the fish.

Listen
Listening...
/
LISTEN: Florida’s Goliath Grouper Is As Big As A Grizzly Bear. And Officials Say, It’s Still Off Limits.

“Based upon the data and the science presented, I just don’t see that it’s viable to even attempt a limited harvest at this stage,” said Commissioner Michael Sole.

The mammoth fish can grow to the size of a grizzly bear.

Overfishing in the 80s nearly wiped out the goliaths. In 1990, harvest of goliath grouper was banned in Florida state waters and Gulf and South Atlantic federal waters. 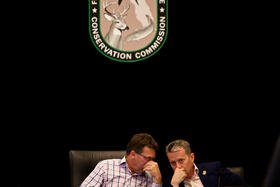 But goliath grouper have made a comeback. Last year, the Commission held workshops around the state to get public input on a proposal to open the goliaths for limited harvest.

Like the meeting Thursday, many of the workshops were packed with divers and activists who spoke sternly in opposition to the proposal.

“FWC seems to be in a rush to return to killing a species just as its numbers are recovering,” said Don Anthony of the Animal Rights Foundation of Florida at Thursday’s meeting.

Commissioners asked staff scientists to dig deeper and come back with another report by the end of the year. If it shows the fish have recovered sufficiently, FWC will again consider a limited harvest.

For now, you can still catch a goliath grouper. You just have to put it back.

It’s Nesting season for Florida’s waterbirds. And, Florida wildlife officials say it’s important the public keeps its distance, while on the beach or boating on the state’s waterways.

Consistently cold waters were responsible for the largest portion of Florida manatee deaths in January.

With burrowing iguanas showing up in people's toilets and damaging expensive sewer lines, Florida wildlife managers are stepping up efforts to control the state's booming population of the wild, invasive reptiles.

Edie J. Banner is an organic chemistry instructor at the University of South Florida Sarasota-Manatee.

While most of the school’s teaching laboratories are at Mote Marine, there’s one particular lab right outside the university’s front door.