Panama City State Representative Jay Trumball’s legislation makes it easier to set up more trauma centers in the state. But hospitals say it will destroy the quality of care patients get. Doctors took to the Capitol Tuesday to oppose the measure.

Trauma Surgeon Michael Cheatham picked up the phone shortly after 2 a.m. June 12th of last year. There was a mass shooting at the Pulse Night Club just a few blocks from the Orlando Regional Medical Center. He hurried to the hospital.

“My initial thought was this is just unreal," he said. "I drive by the Pulse Night club to and from work everyday. And to think that the worst mass shooting in U-S history occurred three blocks from our hospital, it’s still very surreal.” 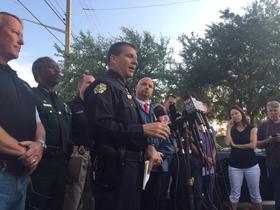 Forty-nine people died. The Orlando Regional Medical Center treated 35 people, many with multiple gunshot wounds. The hospital is a level one trauma center. That means it has a team of medical providers experienced in treating critically injured patients.

Cheatham said the hospital called in more than 400 staffers to tend to Pulse victims. He said legacy trauma centers like ORMC have the resources and training that other hospitals who want to open trauma centers don’t. Allowing more to open than is strictly needed will decrease patient volume and thus decrease doctors' skills.

“You can bill for trauma care and so many hospitals think that there’s money in it," he said. "But if you truly want to be a quality trauma center, it takes a tremendous amount of money that would exceed what many hospitals are able to do. They just can’t invest that kind of money.”

The Florida Department of Health oversees the state’s 19 designated trauma services areas and it caps the number of centers at 44. The health department allows new trauma centers based on population and need.

The state has faced several legal challenges trying to create more new trauma centers. Trumbull said the state has spent $900,000 on lawyers related to trauma center rules and he wants to ease those regulations.

“The amount of litigation is outrageous," he said. "Just this last week, there was a hospital who was applying to be a level 2 trauma center, which is JFK Medical Center, and there are two other level one trauma centers who have filed suit against the department of health."

Trumbull’s legislation removes the cap and allows a new trauma center to operate for five years without evaluating the quality of care. It also does away with the designated trauma areas.

A judge ruled earlier this year that the state wrongly let Orange Park Medical Center to open a trauma center. Hospitals who want to open more such centers argue they’ll be able to provide quicker access to lifesaving care and more competition.

“And in each of the cases I have been involved, there have been allegations every time about the parade of horribles that’s going to happen when new trauma centers are opened," he said. "In fact, what has occurred is that new resources are brought into the state, access is enhanced and the decline that has been projected has not occurred at the existing trauma centers.”

HCA, formerly run by current Governor Rick Scott, wants to open more trauma centers. Scott has also called for removing the cap. But in 2014 the company was blasted for charging patients more than all other trauma centers in the state.

As lawmakers debate revamping the trauma-care system, a judge Tuesday rejected a plan by the Florida Department of Health that likely would have led to an increase in trauma centers across the state.

Northside Hospital in St. Petersburg filed a letter of intent with the state to open Pinellas County’s second trauma center.

A Senate Republican on Tuesday filed a proposal that would eliminate caps on the numbers of trauma centers in the state.

An administrative law judge has ruled that the Florida Department of Health improperly allowed a Miami-Dade County hospital to operate an upgraded trauma center amid a legal challenge from competing hospitals.

An administrative law judge Friday ruled against the Public Health Trust of Miami-Dade County in one of a series of fights about Florida's trauma-care system.