It’s nighttime in Rio Piedras, Puerto Rico, south of San Juan, and the nocturnal chirping of the island tree frogs known as coquís seems louder than usual in the wake of Hurricane Maria.

The Santa Teresita nursing home is running on emergency generator power. But pretty soon the generator – and the home’s air conditioning – will be turned off for eight hours to keep it from overheating and exploding. That’s when Dr. Manuel Herrero and his wife, Dr. Hortencia Pérez, get nervous. They own and run Santa Teresita, and since Maria hit Puerto Rico a month ago, they pray each night the tropical heat won’t make their frail and elderly residents sick – or worse.

“We already had to send one gentleman to a hospital," Dr. Herrero says as he checks every room before turning the generator off. "He was breathing through a tracheal tube and started having respiratory problems at night."

Herrero says that man’s children live in South Florida – which was the site of a nursing home tragedy after Hurricane Irma last month. Still, he says: ”Things are worse here.”

The U.S. territory of Puerto Rico is entering its fifth week with no real operating power grid, which Maria destroyed island-wide. Some 85 percent of its residents still have no electricity.

The Trump Administration has come under fire for not moving quickly enough to restore power. Puerto Rico Governor Ricardo Rosselló says the grid can be up again by December 15. But there is growing fear that the most vulnerable – especially the elderly – are at serious risk.

“The stress of heat and darkness destabilizes them physically and psychologically,” says Dr. Pérez. “It’s a trauma that can cause them to die.” 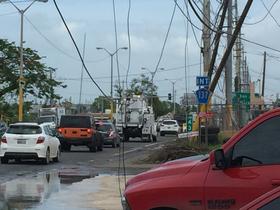 Puerto Rico does not require nursing homes to have emergency generators; but Herrero and Pérez think it should. Since the hurricane, they hoped to get a second, back-up generator to run during the overnight hours. But generator demand is so desperately high in Puerto Rico – and the relief aid red tape is so onerous – they gave up.

Then there’s the security issue. One of the top crimes on any Puerto Rican city’s police blotter now is armed robbery of generators. If you own a new generator on the island at the moment, "it’s like having a pot of gold,” says José Ignacio Nater, who helps run his family’s clinical laboratory in Vega Baja west of San Juan. It just recently procured a new generator so patients there can finally get blood and other test results.

“ You cannot go in a pickup truck exposing a generator," says Nater, "because you can get car-jacked and somebody can put a gun in your face.”

Nater’s mother, Maggie Meléndez, owns the clinic. She says medical diagnostic services like hers are still struggling to get electricity. And that means the growing number of Puerto Ricans falling ill after Maria aren’t getting prompt help.

“Elderly and babies?," says Meléndez, "I don’t know how Puerto Rico is going to live like this.”

As for Governor Rosselló’s goal of restoring power before Christmas? Meléndez echoes what most Puerto Ricans are saying this week:

“I really doubt it.”