A Senate committee in Tallahassee unanimously passed a bill that would set standards for how to swiftly notify the public about pollution. It’s an issue residents in the Tampa Bay Area have grown weary of.

Listen
Listening...
/
Click here to listen to an extended version of the story, which aired on a recent Florida Matters episode about the 2017 legislative session.

Justin Bloom is Executive Director of Suncoast Waterkeeper, an environmental advocacy group. He says most commercial industries like those operating at the port are highly regulated to ensure environmental safety precautions are in place.

“But extraordinary events happen, and sometimes these safety measures are ignored,” Bloom said. “You know, look at what happened with Mosaic, for example.”

It's a reference to last August, when a massive sinkhole opened under a gypsum stack at a Mosaic phosphate fertilizer plant in Polk County.  215 million gallons of contaminated water dumped into the Floridian aquifer – and it was weeks before the public knew about it.

Bloom says while that was and is a serious concern, a more significant threat is constant storm water runoff. The day-to-day pollutants on our lawns, sidewalks and driveways – not to mention toilets – on a rainy day like this, often end up in our water, especially in the summer.

“This type of rain would seriously stress many of the municipal sewage systems in this region, to the point where they might not be able to process all the stormwater which finds its way in – not by design, but because you have this deteriorating infrastructure,” Bloom said.

That's exactly what happened last summer, when Hurricane Hermine led several cities and counties to dump hundreds of millions of gallons of sewage. The city of St. Petersburg was the worst offender, with officials staying mum for several days before announcing the spills. 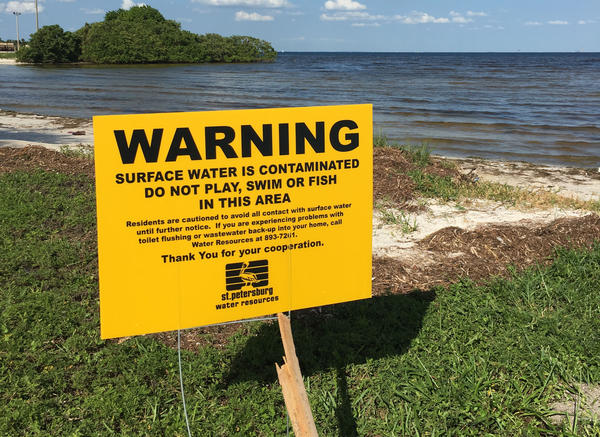 Signs at places like Lassing Park Beach near Albert Whitted Airport warned residents to stay out of the water until bacteria levels came down.

Those signs are long gone, but for park visitor Diana Kenney, the stigma remains.

“I come down here from North Carolina to do a lot of sailing, to do kayaking and paddleboarding; and now I feel like I can’t get in the water,” Kenney said. “And I was born here, and it just hurts my soul to know I can look at it but I can’t get in.”

St. Pete resident Elaine Grace says she lets her dog go in Tampa Bay from time to time now that it's safe. But she's still concerned about future spills.

“It really worries me that myself, my pets or people down [at Lassing Park Beach] with their children all the time on the weekends are going to be exposed to what could be serious illnesses,” Grace said. “So I think we do need to be aware of something like [a sewage spill] occurring immediately.”

In light of the sewage dumps and the Mosaic sinkhole, Florida Governor Rick Scott ordered individual companies to notify the public of any potentially dangerous release. But a judge overturned the rule.

That's where Senator Bill Galvano of Bradenton comes in. His bill would require companies to notify the Department of Environmental Protection within 24 hours of discovering a reportable release.

But what's a reportable release? The Senate Environmental Preservation and Conservation committee amended Galvano’s bill to elaborate on what constitutes a spill requiring public notice, but ultimately it would be up to DEP to decide the specifics. It would also be on DEP to notify the public within a day of getting a report.

“What we did see, directly after the emergency rule, was people reporting everything,” Palenchar said. “It was almost frivolous some of the things that were getting reported.”

Palenchar says the bill will prevent a "boy who cried wolf" situation where residents become so desensitized to pollution notices, they fail to properly react to real emergencies.

He says the bill is also better for smaller players, like farmers and mom-and-pop businesses, who might not be able to send out a press release while trying to fix a problem.

“From the perspective of a small owner-operator that really doesn’t have the resources that a city or a large corporation would have, to be able to get [pollution] information out in a timely fashion I think is a win for the public,” Palenchar said. “I think it will actually provide a better reporting mechanism.”

A number of groups that had fought Governor Scott’s emergency rule including the Florida Retail Federation and the Florida Farm Bureau Federation have come out in support of Galvano’s legislation.

As for the St. Petersburg, Palenchar says city officials have learned their lesson since last year's spills. He points to a flow chart that outlines the city’s protocol for pollution notification. Palenchar says prior to last year's sewage spills, the entire line labeled "Public/Others" didn't exist. 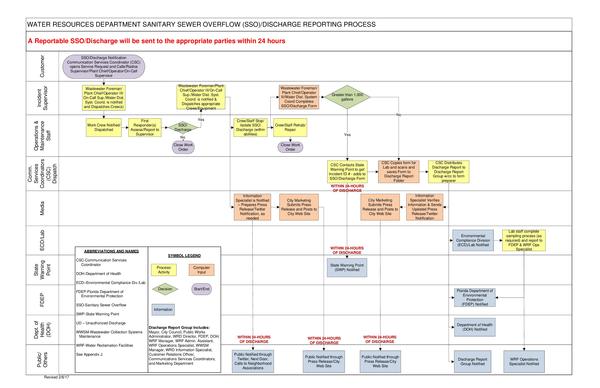 “You know we took the emergency order, we took it to heart; we took our public concern and took that to heart,” Palenchar said. “So regardless of any legislation, we at St. Petersburg are going to continue to contact the media, do our Twitter posts, have subscriberships – do whatever we can to get the public notified when an incident happens.”

Justin Bloom with Suncoast Waterkeeper applauds Senator Galvano’s bill. But he questions whether politics and lack of funds could get in the way of DEP enforcing the requirements.

“We’ll see how, if the bill’s passed, how the department will craft rules,” Bloom said. “And I hope that there’s a lot of opportunity for the public to weigh in on that.”

The bill must be approved by two other committees before heading to the Senate floor for a vote. A similar bill sponsored by Rep. Kathleen Peters (R-South Pasadena) is pending review in the House.

Until then, it's up to Floridians to keep their eyes, ears – and nostrils – open for any signs of pollution.

Authorities along the Space Coast say a broken sewer pipe accidentally released 14,000 gallons of raw sewage into a storm water system that flows into the Indian River Lagoon in Brevard County.

What the Dutch Can Teach Florida About Water Quality, Quantity Issues

The Dutch have famously fought the water for hundreds of years, giving them a reputation for water management. But for all the novel solutions Dutch engineers have produced, lowland areas in The Netherlands face rising sea levels, sinking land through subsidence, high river discharge, and water quality issues linked with agriculture.

This summer, more than 215 million gallons of wastewater poured into the Floridan Aquifer when a sinkhole opened up at the Mosaic fertilizer plant in Polk County.

A researcher who tested the water around St. Petersburg for antibiotic resistant bacteria after the city released sewage into Tampa Bay didn't find any.

St. Petersburg faces $820,000 in fines from the Department of Environmental Protection for releasing over 200 million of gallons of sewage during summer storms.