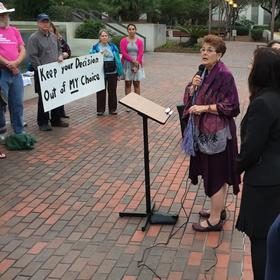 Some say time heals all wounds.  But this week saw the 42nd anniversary of the Supreme Court decision Roe v. Wade, and all these years later, the ideological canyon separating opponents in the fight over abortion seems just as impossible to bridge.

In the US House of Representatives Thursday, the temptation to use Roe v. Wade’s anniversary as a chance to vote on anti-abortion legislation was simply to great to pass up.  But it was the legislation they didn’t vote on that made the nightly news.

Instead of voting on a 20 week restriction that included stringent requirements in the case of rape or incest, the House passed a bill doubling down on its existing stance not to provide federal funds for abortions.  In Washington D.C. thousands of demonstrators marched, and the occasion brought activists to the Florida Capitol, too.

Barbara Devane is the lobbyist for the Florida chapter of the National Organization for Women.  She organized the rally on the Capitol steps along with representatives from Planned Parenthood.

“This is not about rich women,” Devane says. “This is about helping women that need the most help, and that’s poor women, poor working women, middle-class working women who can’t afford to fly out of this country or to another state if need be.”

“I can’t believe that we have to stand here again on another anniversary of Roe v. Wade, and be under attack and be worried about our right to make choices that affect our health care and our lives,” Berman said.

Van Zant’s proposals have drawn criticism for denying abortions even in the case of rape or incest, and because they might not pass constitutional muster.  But there’s another bill coming up this session that approaches abortion differently.  Like bills passed in a handful of other states this measure requires physicians performing abortions to have admitting privileges at a nearby hospital.

It’s being proposed by Rep. Mike Hill (R-Pensacola).  Hill says the intent of his bill is to protect the health of the mother by ensuring the doctor performing the procedure will be on hand to address any complications that might arise.

“If right now there is some complication to that surgical procedure, then the doctor who’s performing that procedure simply calls emergency, they come pick up the woman, and then that doctor just washes his hands of the whole issue,” Hill says.

“I mean that’s the purported idea and that’s what is proposed, but in reality it’s a fallacious argument,” Berman says.

Berman argues it can be difficult for doctors to gain admitting privileges, and there’s little medical reason for it to begin with.  The mortality rate for women getting abortions is extremely low.  According to former president of the American College of Obstetricians and Gynecologists, Jeanne Conry, it’s lower in fact than colonoscopies.  In some states, similar requirements have made it significantly more difficult for women to access abortion services, and Berman fears the same could happen in Florida if the bill passes.

It’s too soon to say whether the bill has a shot in the coming session, but unfortunately, it seems clear the argument won’t be settled before Roe turns 43.

Doctors who want to provide abortions will need admitting privileges at nearby hospitals, according to a bill filed by Rep. Mike Hill, R-Pensacola, the the News Service of Florida reports.

A state appeals court is backing a Tampa teen’s request to not notify her parents  that she wanted to get an abortion.

The News Service of Florida said the 2nd District Court of Appeal decision was the second case in a week related to the 2004 constitutional amendment about parental notification.

The court said a circuit judge disregarded the 18-year-old’s testimony that she researched abortion procedures and risks and considered alternatives.

A Florida district court has denied a pregnant minor’s appeal to avoid notifying her parents she planned to have an abortion. The ruling stems from a 2004 state constitutional amendment requiring parents to be notified before teenage daughters terminate pregnancies.

The Second District Court of Appeal has denied the appeal by an unidentified Hillsborough County minor. Under the state’s parental-notification law, the girl’s case was submitted to legal tests to determine if she qualified for a notification waiver that would allow her to have an abortion without telling her parents.