October is Domestic Violence Awareness Month, and local law enforcement and community service groups are encouraging people to speak out about the problem.

“Pinellas County ranks fifth in the state of Florida for the number of domestic violence cases last year and Hillsborough County ranks fourth this year, so this area does have a high concentration,” according to Lariana Forsythe, CEO of

The Pinellas County organization trains advocates who work with people in domestic violence situations, helping victims overcome the barriers that keep them from moving forward with a healthy life.

“So many times victims in abusive situations, they are embarrassed. They feel like it’s their fault, that they have done something wrong, because as a society we really do victim blame and victim shame, without understanding the complexities that exist in that kind of relationships,” said Forsythe.

Though some people believe that only men can be perpetrators, women can also be abusers. Forsythe also points out that domestic violence is also not limited to one group of people, which makes it important for everyone to recognize the signs of abuse in a relationship.

“We need to stand up to silence. We need to remove that shame from the situation, help the victim realize that it’s not their fault that they are being abused.  It’s the abuser’s choice to be putting them in that situation, so we need to enable them with tools, with conversations, with support,” said Forsythe.

Statistics show that less than 20% of people who are killed in a domestic violence situation ever reached out for help. This is where friends and family can also step in and help prevent a tragedy.

“We encourage you to reach out and say something," said St. Petersburg Police Major Shannon Halstead. "It doesn’t mean that law enforcement is going to go directly to the house and arrest everyone, but it gives us the opportunity to intervene and at least let the individuals involved know that there are resources available."

These are some events going on across the Tampa Bay are this month to spread awareness of domestic violence:


If you or someone you know is a victim of domestic violence, and you are concerned about the dangerous situations they are involved in, call the Florida Coalition Against Domestic Violence hotline at 1-800-500-1119. 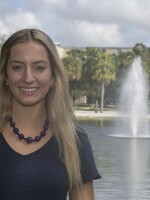