The decision came after the Florida Fish and Wildlife Conservation Commission's investigation into the city's sewage discharges of 2015 and 2016.

The Tampa Bay Times reported FWC investigators found evidence that 89 felonies and 103 misdemeanors were committed when the city released up to 200 million gallons of wastewater, and pumped 700 to 800 million gallons underground.

Howver, McCabe told the Times that the FWC investigation didn't identify anyone responsible for the releases of water, so no one could be prosecuted.

"There's a where. There's a when. There's no who," McCabe said. "It would totally be a waste of time and resources to hold the city criminally accountable."

"It just makes sense. If there was anything criminal, they would have pursued it to begin with," said Palenchar. "I think that what we are trying to accomplish underneath the consent order, and even outside of that - we are going above and beyond with what the DEP is requiring."

Palenchar also clarified details on wastewater that was flushed into injection wells at a treatment plant after Hurricane Irma.

Earlier last week, the city released an update on how it handled some sewage after Hurricane Irma - and they may have broken some rules by not telling the public until now.

According to a statement from the city, more than 15 million gallons of what officials called fully treated wastewater was injected into underground tanks or wells. However, Palenchar also admitted the wastewater wasn't treated with enough chlorine.

"So it went through the full treatment process, but the end product didn't meet the chlorine residual requirement to be able to be distributed to the reclaimed water or to go down the injection wells," he said.

Additionally, a spill of more than 430 thousand gallons occurred at the Northeast Water Reclamation Center on September 11.

The spill and water injections makes this incident the city's biggest sewage discharge of 2017.The Florida Department of Environmental Protection is slated to meet with St. Pete officials on Nov. 8 to discuss future protective measures. 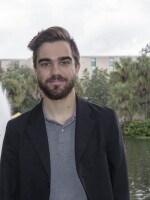 Mark Schreiner
Mark Schreiner has been the producer and reporter for "University Beat" on WUSF 89.7 FM since 2001 and on WUSF TV from 2007-2017.
See stories by Mark Schreiner