Members of a national anti-abortion organization called Created Equal are barnstorming battleground states in the final days of the election. It made a stop in downtown Jacksonville Monday.

The group isn’t allowed to endorse a candidate due to its nonprofit status, but its national director, Mark Harrington, said he sees one candidate as particularly threatening to his cause.

“We do know what we get with Hillary Clinton, right? She’s already said she’s going to put justices on the Supreme Court that affirm Roe v. Wade. To me that’s all you got to know,” he said.

Harrington said he uses graphic imagery at his events because it’s proven to change the minds of voters. But just as fast as he set them up, Harrington was asked to move his signs with images of bloody fetuses further from the Jacksonville Landing’s entrance, which is holding a kids trick-or-treating event.

“After someone viewing one of these images, they tend to be more against abortion. So, the statistics and the studies are on our side,” Harrington said. “The idea that this would turn someone against us … to me is kind of, you know, they’re already in that camp.”

Harrington offered up a Canadian study funded by the anti-abortion group End the Killing as proof his strategy works. It concluded graphic imagery increases negative feelings toward abortion.

However, the same study found little evidence the graphic campaigns move pro-choice voters to the anti-abortion column. A Jacksonville University marketing professor Doug Johansen said campaigns like Harrington’s are more likely to rally the base.

“For example, if you take the cigarette ads that show a dead lung … people who don't smoke and think smoking is bad for you might think, ‘Yeah, that’s  true, and that’s a great reason not to smoke.’ Smokers might say, ‘It may be true, but it may not happen to me,’ ” he said.

Harrington’s group will be flying a plane towing anti-abortion banners around downtown Jacksonville for the next couple of days.

News intern Blake Allen can be reached at newsteam@wjct.org or on Twitter @BAllenMMJ 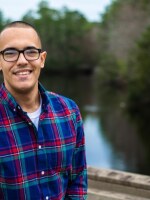