What You Need To Know About Florida's Algae Crisis 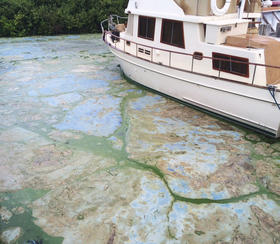 How would you like to pack up the cooler and head to your favorite Florida beach -- only to find the ocean water covered with foul-smelling, guacamole-thick fluorescent green gunk?

That's what many Treasure Coast year-round residents and tourists are dealing with.  The blue-green algae spread is so bad that Gov. Rick Scott last week declared a state of emergency in four Florida counties -- including Palm Beach County.

We spoke to Ed Killer, a columnist who covers water issues for TC Palm.com/Treasure Coast Newspapers.

What is the algae and where did it come from?

The algae is a cyanobacteria found in Lake Okeechobee, which holds not only freshwater but runoff from nearby farms and ordinary neighborhoods. When runoff contains too many nutrients, mainly nitrogen and phosphorus, the pollution can act like fertilizer.

How did the algae find its way to Florida beaches?

In January, to keep Lake O from overflowing after record rains, the U.S. Army Corps of Engineers started releasing the polluted water into rivers and estuaries that lead to the coast.

What counties are affected?

Gov. Rick Scott has declared a state of emergency in Martin, St. Lucie, Palm Beach and Lee counties. Palm Beach County’s algae bloom is believed to be unassociated with the Lake Okeechobee-based cyanobacteria. Although Lee County has not seen algae blooms as severe as the ones in Martin and St. Lucie counties, Lee was added because the Army Corps also releases Lake O discharge into the Caloosahatchee River.

What health risks does the algae pose?

According to the Centers for Disease Control and Prevention, toxic algae blooms are harmful to humans, companion animals, livestock and wildlife. Coming into direct contact with toxic algae through activities like swimming can cause a rash. Drinking contaminated water can cause nausea and vomiting. Some research shows a link between long-term inhalation of toxic algae fumes and neurological disorders like Parkinson’s and Lou Gehrig’s diseases.

What is being done to solve the problem?

The U.S. Army Corps of Engineers has scaled back its discharge volume by about 25 percent. Florida’s Department of Environmental Protection continues testing the toxicity levels in all the areas where the algae is turning up. In a letter to President Barack Obama dated July 6, 2016, Gov.  Rick Scott requested a federal emergency declaration to deal with the crisis.

As a noxious algae bloom fouls beaches on Florida's Atlantic coast, the U.S. Army Corps of Engineers is preparing to reduce the flow of water from Lake Okeechobee.

With widespread algae blooms causing beaches to be closed in Martin County, Gov. Rick Scott issued a state of emergency for Martin and St. Lucie counties on Wednesday.

Scientists have been watching a large toxic algal bloom in Lake Okeechobee.

They worry the bloom could spread from the state’s largest lake through man-made canals to coastal estuaries like the Indian River Lagoon.

The Indian River Lagoon stretches about 156 miles along the Florida's east coast. And it's where Laurilee Thompson has her earliest memories.

“I had a little tiny rowboat when I was 6-years-old . . . There were barnacles and oysters and sea squirts,” the Titusville resident recalled. “You know even just the pilings in  the sea walls were alive. . . the cone Jellies used to come in the spring . . . and you get this big green explosion. There were entire ecosystems just along the sea wall.”