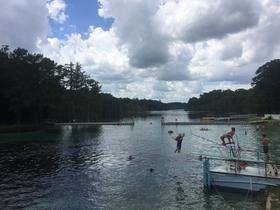 Florida Governor Rick Scott is touting $50 million to protect the state’s springs.  But that’s not the only effort state officials are working on.  In Jackson County there’s one program geared toward farmers.

At Jackson Blue Spring there’s a dock with a diving board stretching out over the vent.  A line of kids are waiting for their turn to dive, flip or cannonball into the water before paddling back to the dock, hopping in line and doing it all over again.

“This is a first magnitude spring which means it discharges over 100 cubic feet per second on average,” Angela Chelette from the Northwest Florida Water Management District explains.

“So it’s in the same magnitude classification as Wakulla Springs or St. Marks Rise,” she says.  “Obviously it’s on the smaller end of the scale than those two, because Wakulla is closer to about 500 cubic feet per second now, so this is about a fifth of that.”

The spring flows out into Merritt’s Mill pond, a long tree-lined lake that feeds the Chipola River.  But to see what Chelette’s doing to protect the spring, you have to go in the other direction—upstream. 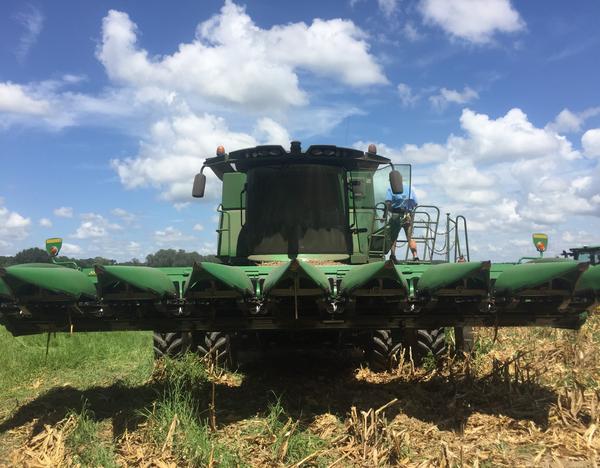 At Bishop Farms, Craig Bishop is driving a grain combine.  It’s a massive green and yellow tractor with nine big teeth, called the header, jutting straight out in front of it.  Those teeth help guide cornstalks into a spinning drum.  When the combine is done with it, this field of stalks will be a truck full of kernels.

The Jackson Blue Spring basin is full of farms like Bishop’s, but the fertilizer he and other farmers need for their crops can threaten the spring’s water quality.  He explains that’s where the water management district’s cost sharing program comes in.

“They are cost sharing on nitrogen pumping stations that we can put at the irrigation system,” Bishop says, “[so] that we can apply just a little bit of fertilizer at a time on it.  That way it minimizes leeching and minimizes run off.”

After Bishop has finished his run with the combine, Chelette lays out a sheaf of spreadsheets on the tailgate of his pickup truck—going over the different improvements Bishop is applying for in the coming year.  Chelette says at its simplest level the water management district is trying to help farmers make improvements that reduce water or nutrient use.

“We will pay 75 percent and the farmers provide the other 25 percent up to a total project cost of 75,000,” Chelette says. 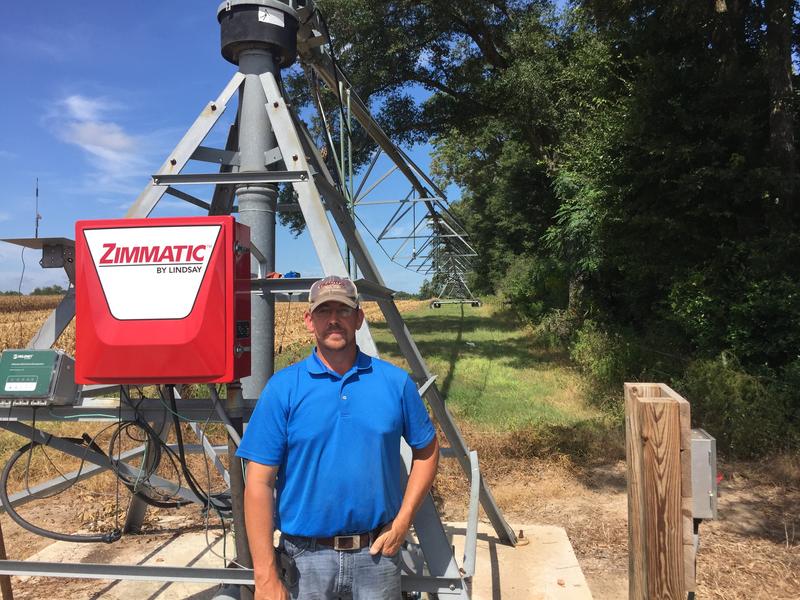 This will be the fourth year the district has run the program, and so far it has committed about $2 million.  A little more than $112,000 have gone into irrigation and fertilizer systems on Bishop’s farm.  Many of the improvements have been put toward what are known as pivots.

He’s sort of the technological jack of all trades on Bishop’s farm.  A pivot works kind of like a compass in geometry class.  There’s a well—that’s the fixed point—and then there’s a long pipe about ten feet off the ground stretching out from the well with sprinklers all the way down its length.  It’s got tires and it spins around that center point watering the field as the pipe passes overhead.

But Hurst says this pivot has a series of upgrades thanks to the cost sharing program.

The system even alerts him on his phone if something goes wrong, and because it’s built to mix nutrients like nitrogen into the water before it hits the plant Hurst is able to minimize how much he uses.

“Nitrogen, phosphorus, pot ash, magnesium, calcium—anything like that we put out, you know we try to put what the plant needs,” Hurt says.

“We don’t try to skimp on it,” he goes on, “we want to put what it needs out there, but you know you don’t want to overly do it because it’s costing you money.  Not to mention you’re putting stuff down there that’s going to go into the aquifer at some time.  We don’t need that.”

The district got a million dollars for cost sharing this year and it’ll be taking applications from farmers near the spring through the end of this month.

Even If You Only Drink Bottled Water, Here's Why You Should Check What's Coming Out Of Your Tap

A lot of people in South Florida buy bottled water for drinking -- they don’t get it from the tap. In part, it’s a cultural thing. In many other countries, people don’t drink tap water because of concerns about contamination and they continue this habit even after moving here.