South Miami-Dade Health Centers Up And Running After Hurricane Irma

Guillermo Porras couldn’t get in touch with his doctor for a week after Hurricane Irma.  His cell phone service was spotty after the storm and he was running low on his prescriptions.

“It’s been very difficult after the hurricane,” he said.

Even if he could get through, Porras would have found the South Miami Health Center that he visits was closed because of the extended power outage that affected much of South Florida.

The center is part of  Community Health of South Florida, which has 11 clinics in the South Miami-Dade region. After Hurricane Irma, some of the centers remained closed for days because they were without electricity.

The Doris Ison Health Center opened the day after Hurricane Irma hit because it has a generator. And as other clinics opened, patients were being re-routed to open clinics if their neighborhood health center was not yet operational.

Porras didn’t get that message.

One week after the hurricane, he was able to get an appointment at the South Miami Health Center.  In the interim, a pharmacist gave him sample packets of his prescription until he could get a refill.

On the day he visited, the center was still operating with no internet.

“Since we don’t have access to the system we have to find ways to get it around it so we call the other center where the system is working now,” said Dr. Marie Olette Celonge.

A federal mandate requires health records to be stored digitally.  That means Dr. Celoge and nurses can’t just pull out a file from a cabinet to see a patient's  medical history. 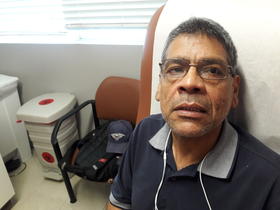 In Porras’ case, a nurse called the West Perrine Health Center where the internet was working and someone there shared his medical information by phone.

Dr. Celoge said that since reopening catching up on prescriptions that need refills was a priority.

“We had one [patient] who was without his insulin for like a few days,” she said.  “The blood sugar can rise, they can go into a coma and other complications.”

Brodes Hartley, CEO of Community Health of South Florida, said it was urgent to get the centers up and running as soon as possible.

“We are the safety net provider in this area and we take that very seriously,” he said.

In South Miami, Guillermo Porras was finally able to get what he needed at his recent visit to get his prescription refill.

“I am very grateful,” he said.

The winds and outer bands of Hurricane Irma are long gone, but as rainwater drains south through Florida’s rivers and watersheds, the storm still presents a slow-moving crisis headed right for Lake Okeechobee.

How 'Community Resiliency' Can Help Before And After A Storm

Resiliency is defined as the ability to recover from difficulties.

And when it comes to a life-changing event like Hurricane Irma, there are two different kinds of resiliency: an individual’s ability to bounce back and “community resiliency.”

It’s been more than a week since Hurricane Irma.

Yet many smaller communities in Florida’s rural counties are still suffering and need basic resources, according to a disaster relief expert with the Salvation Army.

The nursing home where residents died following a hurricane-induced air conditioning outage was not on the priority list for power restoration, according to the facility's utility provider and Broward County officials.

Long after the floodwaters recede and the debris is cleared, the mental health impacts of disasters like hurricanes can linger.

Psychologist Jean Rhodes of the University of Massachusetts-Boston has spent more than a decade studying what happens to people years after a natural disaster — in this case, Hurricane Katrina.