South Floridians Help Fly Puerto Rico's Sick To Get Treatment In The U.S.

Saturday may have been rainy, but that didn’t stop a small private plane from getting eight very sick people out of Puerto Rico and into Ft. Lauderdale to receive the indispensable medical treatment they can't receive on the island at the moment.

After Hurricane Maria devastated the island, South Florida resident and Puerto Rican native Debbie Sosa started making calls to help those she didn’t think could wait until mid-December, when the government in Puerto Rico estimates power will be restored.

Listen
Listening...
/
Hear from patients like Ismael, at Sano Jet Center after the plane landed.

Sosa partnered with others Puerto Ricans in South Florida, the Foundation Stefano, the Boys and Girls Foundation in San Juan, and an anonymous businessman who donated his private plane, to get eight people in desperate need of treatment to the Sano Jet Center in Ft. Lauderdale.

“We had the goods to deliver to Puerto Rico, to the Boys and Girls Foundation, and at the same time we worked together with them to bring these patients to get treatment,” she said.

When she’s not organizing trips to and from Puerto Rico, Sosa works for Miami-Dade Public Schools with English-Spanish Language, or ESL, students. But ever since Hurricane Maria hit, she feels like helping people from her island is what she’s supposed to be doing.

“Call me crazy, I’ve been working during the day and at night I’ve been packing boxes,” said Sosa.

Ismael Ortiz was a financial advisor in Puerto Rico. He also has Diffused Large B-Cell Lymphoma, an aggressive form of cancer. He found out about the flight through other cancer patients and called Sosa to help him secure a seat. 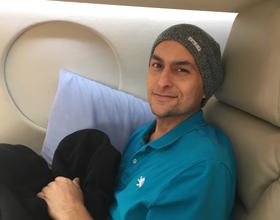 “Over here I’ll probably be helping others get out while I’m, you know, awaiting treatment...because I couldn’t continue my treatment over there,” he said.

Ortiz says without electricity the water supply is impure, which only compounded his health issues.

“I got this fungus all over my face and on my body out of nowhere, and it was from the water,” he said. “One, you have a condition and then the conditions over there complicate everything even more.”

Ortiz will fly to Washington State next, where he can get his next round of chemo.

Also on the plane, was 73 year-old Juan Gimenez. His daughter Carla Osorio picked him up to bring him to see his wife, who’s in an Orlando hospital after suffering a stroke.

People on the plane from San Juan to the Sano Jet Center started calling Gimenez “Abu,” short for abuelo.

Meanwhile, parents Jonathan and Rosemary Navarro were on the plane with their three-year-old son, Joanlel who has a condition called Trisomy 13. Now that they’re off the island, they don’t have to worry about powering their son’s ventilator.

Sosa may have helped these patients and family get access to treatment, but she says isn’t done. She a part of a growing group of South Floridians acting to get more sick people off of the island, privately. “I found my calling I want to do this now, from now on,” she says.

A pair of physicians from the University of South Florida have returned to Tampa after a trip to Puerto Rico, but they're already looking forward to going back to help in the island's long-term recovery.

In the hours before Hurricane Irma came barreling towards Florida, Gloria Guity and her adult children went to five different shelters before they arrived at Miami Edison Senior High School.

“Here is better than where we were,” Guity, 76, said sitting at a cafeteria table. “Here I told them to put me next to the bathroom so at least I can take them to the bathroom.”