In the next 30 years — about the length of a mortgage cycle — more than 300,000 U.S. homes could experience chronic flooding due to rising seas, according to a report released this week by the Union of Concerned Scientists.

The researchers are worried not just for the half million or so people whose homes will be directly affected by 2045, but for the broader impacts on communities as housing prices fall, adaptation costs rise and neighborhoods are forced to consider relocating.

WLRN's Kate Stein spoke with one of the scientists. Nicole Hernandez Hammer is a researcher, climate activist and South Florida native who dove into the data to figure out what it means for Florida communities. 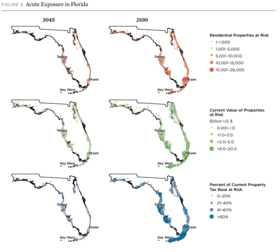 One sobering takeaway: of the 48 continental U.S. states, Florida has the most property at risk. The researchers say that if global warming and sea-level rise continue unchecked, more than 1 million properties in the state will experience chronic flooding by the end of the century.

But, Hernandez Hammer and other scientists say, there's a lot we can do to prepare.

Listen
Listening...
/
Nicole Hernandez Hammer of the Union of Concerned Scientists talks about a study that found by the end of this century, one million Florida homes could experience chronic flooding because of sea-level rise.

Hernandez Hammer: We're looking at both residential properties and commercial properties, but if you're looking at a property that's at a very low elevation and a high risk zone it could also be the home where someone's worked for a really long time and has invested all of their savings and it can be kind of their main investment. And so for them they stand to lose a bigger portion of their wealth. And so at that point you start to think about how to help folks that have fewer resources, who are going to get the worst of it.

WLRN: What are we going to do with the data?

Well, actually we looked at a couple of different scenarios. So, what would happen if we followed through with the Paris agreement [the U.N.-led global action plan to cut carbon emissions and limit sea level rise]. ... And if we did, the majority of those properties would be spared. So in terms of people, we were looking at 4.7 million people at risk and most of them would be spared. We're looking at 4.1 million people maybe not having to deal with chronic inundation, some degree of flooding.

That's important. Like, there are four million people who would be spared having to deal with flooding.

But also, the population of the United States is well over 300 million people. Can you talk about why the other 296-plus million of us who aren't going to be affected should care about this?

I think when we talk about real estate markets — if the property value goes down, it doesn't just affect those properties, it affects the communities. So right now a lot of these coastal properties don't really reflect their value in terms of the risk. And eventually the way we perceive the value now and the reality of the risks associated with rising seas will meet up.

In fact, that's already moving in insurance circles and in real estate investment circles. And so once the market better reflects the value by including the risk of sea-level rise in those properties, then you're not going to be able to get the same level of tax revenues that you were before. And those are tax revenues that you would use for schools and for emergency services...

Exactly. Also your bond rating might go down and so then that will be another source of funds that you would need for adaptation that would no longer either be available or available to the extent that that community might need it.

Some communities, like you look at Miami Beach and they've got an incredible amount of resources and they've been doing a lot of work in order to to mitigate the impact of flooding in that area. But other communities don't have those resources. And we're not necessarily advising on what it is that communities should do. But I think the first step is being aware, because the worst thing you can do is just ignore this.

The report includes an interactive map of coastal properties at risk, using data from the National Oceanic and Atmospheric Administration and the online real estate marketplace Zillow.

This interview is part of The Invading Sea, an editorial collaboration among The Miami Herald, The Sun-Sentinel and The Palm Beach Post, with reporting from WLRN, on the growing threat of sea level rise to South Florida.

You can find more coverage at theinvadingsea.com.

Melissa Ross: What I Learned About Climate Change At The Metcalf Institute

This month, First Coast Connect host Melissa Ross traveled to Rhode Island for a fellowship for journalists to learn about the science of climate change.

The threat of sea-level rise stretches well beyond the coastline.

Sea-Level Rise Might Soon Raise Insurance Costs. Here's What Local Leaders Want To Do About It

If you thought sea-level rise was the greatest immediate threat to South Florida’s future, you may need to think again.

There’s growing concern that the perception of the sea-level rise threat by insurers, banks and investors might submerge South Florida before rising seas do.